Want to know the trick to making Extra Crispy Roast Potatoes? Quick parboil, stab and poke, and oil them up. So easy! This healthy staple dinner side dish recipe is both vegan and Whole30 compliant. I love to serve it with easy to make cashew sour cream.

Guys, I've got a pan of CRISPY oven fried potatoes for you!

These babies are truly crispy on the outside and soft and creamy on the inside. They're rolled in my fav flaky sea salt, sprinkled with green onions, and dolloped with cashew sour cream … or normal sour cream, if you're not a weirdo like me.

I've been toying with the idea of doing the Whole30 diet for a little while now. Have you heard of it? It's basically super clean eating for 30 days. When I hop on the train in a week and a bit, I'll tell you more about it. I keep playing with recipes that I'll be able to eat during those 30 days. It's like I'm terrified and need to plan every meal beforehand. (I am terrified and clearly an over planner.)

These crispy potatoes have been a regular on the table here, taking up the space between giant salads and pan-fried chicken and fish. They're delicious.

Then there's the cashew sour cream. You guys need to know more about this …

Here's the thing about vegan sour cream: IT'S NOT SOUR CREAM! ← Sorry to scream at you, but I need you to know.

I don't care what kind of vegan version you try; it's not the same. You're going to read blogs that say things like, “Once you try avocado/ cashew/ magic vegan sour cream you'll never miss dairy sour cream.” That's BS. I understand if you have to lie to yourself to get through your dairy-free day. We all do what we have to do. (I'll be doing that once I start the no cheese Whole30 soon.) But I'm not going to try to convince you that something tastes different than it does.

This (and every!) vegan sour cream does not taste like sour cream. I've tried lots of versions, and none are even close.

This cashew sour cream is definitely your best bet if you're doing dairy-free. The sour taste comes from lemon juice, which isn't anything like the sour taste of sour cream. But it is creamy, and it's nice to dip/ dollop/ spoon something over your crispy roast potatoes.

Back to these Extra Crispy Roast Potatoes …

They're the side dish of my dreams. The salty crispiness reminds me of french fries, but only in grown-up version pretty nugget potato form. It's the quick par-boil that does the trick here. It softens the potatoes just enough that you can rough them up by stabbing them a few times with a fork. All those rough edges catch the tasty fat you pour over them and help them turn crispy in the oven. And because they're partially cooked, they won't' have time to burn in the extra hot oven.

It's totally worth the extra quick step of throwing them into a pot and giving them a boil.

Weekend breakfast tip: if you're making these on a Friday night, make extra. They're delicious quartered and fried into hash browns the next day. Just sayin'.

If you make these Extra Crispy Roast Potatoes with Cashew Sour Cream make sure you snap a pic and tag #theendlessmeal on Instagram so I can like and comment on your photos. I love seeing TEM recipes you create! 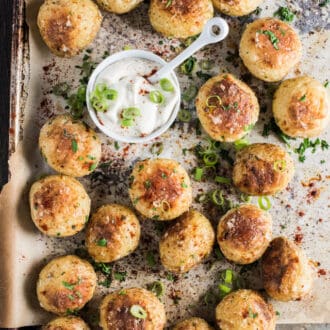 Yield: 4 servings
Prep Time: 15 mins
Cook Time: 35 mins
Total Time: 50 mins
Want to know the trick to making Extra Crispy Roast Potatoes? Quick parboil, stab and poke, and oil them up. So easy! This healthy staple dinner side dish recipe is both vegan and Whole30 compliant. I love to serve it with easy to make cashew sour cream.

If you don't have Maldon Salt, reduce the amount of salt to 1 teaspoon. Maldon Salt has a very mild flavor so you can use a lot more of it. To soak the cashews, place them in a jar and fill the jar with water. Leave the jar in your fridge for 4-24 hours. If you have a high-powered blender (like a Vitamix) you can get away with not soaking the cashews. If you have a regular blender, the cashew sour cream may not be perfectly smooth.
Serving: 1 serving = ¼ of the recipe (with vegan sour cream), Calories: 459kcal, Carbohydrates: 51g, Protein: 11g, Fat: 26g, Saturated Fat: 10g, Polyunsaturated Fat: 3g, Monounsaturated Fat: 11g, Cholesterol: 29mg, Sodium: 1909mg, Potassium: 1207mg, Fiber: 6g, Sugar: 4g, Vitamin A: 68IU, Vitamin C: 50mg, Calcium: 46mg, Iron: 4mg
DID YOU MAKE THIS RECIPE?If you love this recipe as much as we do, be sure to leave a review or share it on Instagram and tag @TheEndlessMeal.
North American Potato Recipes Quick and Easy Recipes Recipes Side Dishes