Step up your guac game with this DELICIOUS Chunky Grilled Guacamole. The subtly smoky flavor of the grilled veggies really kicks up this easy party appetizer.

Friends! I've made you a plate of what I'm not so humbly calling The Best Freaking Guacamole EVER. Grilled guacamole is going to knock your socks off.

Guacamole is the single best dip ever created. Thank you, Mexico. We all owe our chip dipping happiness to you.

Grilled anything also gets best ever status. Smoky little charred bits that are full of flavor and scream EAT ME are always (always!) the best.

Combine those two bests evers and, well, I'm sure you know where this is going.

The one thing we haven't grilled are the avocados. When I said grilled anything is the best, what I really meant was, “Grilled everything EXCEPT avocados is the best.” Cooked avocados IMO are kind of gross. Not 100% ick, but enough that I don't want to go out of my way to cook them.

I know that cooking avocados with eggs in them was all the rage a few years ago, but I couldn't jump on board that trend. Avocados turn a weird form of mushy when cooked and it totally throws me off.

So in this grilled guacamole, we grill everything except the avocados. This way, we keep the avocados delicious while adding the smoky flavor from the grilled veggies.

The smoky flavor of the grilled veggies is subtle, but it changes everything about the guac. If you don't tell your friends that it's grilled guacamole, you're going to hear, “What's going on with this guacamole? Why is it so good?!!”

By grilling the lime, japaleño, shallots, and tomatoes you not only add flavor, but it also changes the veggies in other delicious ways.

The japaleño loses some of its heat so you can use more (and so taste its flavor more) without lighting your mouth on fire.

The shallots also become more subtle when they're cooked. Think about caramelized onions versus raw onions. It's the same deal here. Normally, two shallots would be overwhelming in guacamole, but it totally works once they're grilled.

The tomatoes also soften a little so they blend better into the guacamole. All around, grilled guacamole wins.

Can we have a quick chat about grilled tortillas?

I didn't include the recipe cause I thought you might laugh at me. I mean, who even grills tortilla chips anyway? #weirdo

I wanted the pretty grill marked chips for the pictures, but it turns out they're AMAZING to eat, too. They picked up a ton of smoky flavor from the BBQ and were a lot hardier than regular, store-bought chips.

I won't lie, they were a bit of a pain to make. But if you want an extra special appy to take to a party, they're worth the extra effort.

Here's how you're going to make grilled tortilla chips:

If you want to have a true guacamole party, try serving a few different kinds. Add this Easy Guacamole Recipe, Smoky Chipotle Guacamole, apple guacamole, and Aji Guacamole to your list!

Subscribe to THE ENDLESS MEAL'S NEWSLETTER for FREE to get healthy and delicious recipes each week + our cookbook! 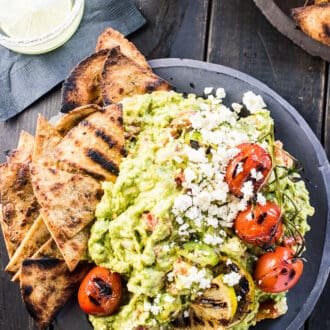