Stuffed Spanish Pork Chops are filled to the brim with roasted red peppers, sun-dried tomatoes, chorizo, and juicy Gordal olives from Spain. They're an easy-to-make (and healthy!) dinner recipe that everyone will love!

Hold your Spanish horses, my friends. I've made some stuffed chops filled with all our favorite flavors.

These babies are pan-fried boneless pork chops and they make everything right at your dinner table.

See those Gordal olives from Spain up there? I snacked on them while cooking, stuffed them into the pork chops, then served some extra on the side with dinner. I'm a bit obsessed. It's a good thing they're so healthy!

Spanish olives really are the best. I've professed my love for them over and over:

It's nearly impossible to choose a favorite variety (they're all so good!) but these Spanish Gordals are top of the list. They're nicknamed The Beauty of Spain, and it's easy to see why. They're big, plump, and so delicious.

Their gentle favor makes them a great option to serve everyone. Even my two-year-old daughter ate all the Spanish Gordals out of her chop then kept asking for more. I had to bribe her to eat more dinner by offering her a slice of a Spanish Gordal after every bit of pork. It's not that she didn't like her stuffed pork chops, she just liked the “owives” even more.

Did you know that one out of every two olives eaten in Canada is from Spain? Clearly, I'm not the only Canadian who's in love with Spanish olives!

How to prepare your stuffed pork chops:

That's it! You're ready to pan-fry those chops!

In my mind, there is only one way to cook these guys. Pan-fried pork chops are so good. They'll get a beautiful golden crust that makes them impossible to resist. Just have a look at the picture below if you don't believe me.

How can I tell if my pan fried pork chops are cooked through?

The best way to tell if your stuffed pork chops are cooked is to use a meat thermometer. Do you have one? If not, I HIGHLY recommend getting one. I use mine more often to make sure I'm not overcooking meat as we all like to err on the side of caution and cook meat too long.

Pork needs to be cooked to a minimum of 145 degrees Fahrenheit to be safe to eat. You don't want to cook it much more than this or it will end up chewy and tough.

When you're stuffing meat, the stuffing needs to be cooked to the same temperature as the meat. In this case, 145 degrees. Use your meat thermometer to test the very middle of the stuffing to see if it (and the pork chops) are fully cooked.

Do you have favorite stuffed pork chops recipes? Let me know in the comments below! 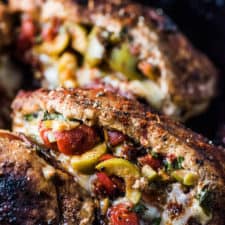 We absolutely adore pork chops for dinner. If you love them too, make sure to check out all of our pork chop recipes!