This homemade cinnamon sugar adds sweetness and spice to everything from buttered toast to ice cream. It's quick and easy to make using our perfect cinnamon sugar ratio, and it will keep in your pantry for up to 2 years!

Make your mornings a little sweeter by sprinkling some of this sugar on pumpkin oatmeal muffins or apple pancakes.

Bakers and home chefs have varying opinions about the best cinnamon sugar ratio. While it does come down to personal preference, this one-part cinnamon to four-parts sugar (1:4) ratio has become our go-to. It's the perfect balance between sweetness and spice, and it's versatile, too!

Sprinkle it on buttered toast, on top of muffins, on pie crust, or use it as a filling for cinnamon rolls. We've even been known to add some to our morning coffee for a little extra kick.

This cinnamon sugar recipe is a breeze to make. It's also much more economical to make at home, so you can skip the store-bought versions.

Seasoning blends like this one also make a great food gift. Pour it into a cute little jar, tie some twine around it, and you've got the perfect treat for a holiday hostess.

You only need two simple ingredients to make this delightful sugar:

There are a few different varieties of cinnamon on the market, each with its own unique flavor profile. Here's a breakdown of the most common types so you can choose the one that's right for you:

How to make cinnamon sugar

This delicious sugar is so simple and makes everything taste better. You'll find so many excuses to use it!

To make the perfect cinnamon sugar ratio, mix ½ cup granulated sugar with 2 tablespoons of ground cinnamon, pour it into a jar to store, and sprinkle it on everything from french toast to oatmeal.

While there's no right or wrong way to make cinnamon sugar, we like this 1:4 ratio because it's got a decent amount of bold cinnamon flavor. If you prefer milder cinnamon sugar, try using two teaspoons of ground cinnamon (in place of two tablespoons).

It's easy to scale the ratio up or down, too!

How to store cinnamon sugar

This is one of those essential homemade spice blends that everyone needs in their pantry. It's so simple to make, too. Once you've mixed the sugar and cinnamon together, transfer it to a glass jar or shaker bottle for easy everyday use.

Keep in mind that spices do have a shelf life and lose their potency after some time. While it won't go bad per se, it's best to use it sooner than later for optimal taste.

Can I use a different kind of sugar?

Yep, you can definitely use brown sugar or cane sugar. It will change the flavor slightly but it will still taste delicious. You could also use a calorie-free sweetener like stevia.

How long does it keep?

You can store this sugar in an airtight container for up to 2 years!

How to use cinnamon sugar

There are a million different ways you can use this sugar. It adds that extra sweetness and spice that everyone loves. Sprinkle it on waffles and pancakes, cookies and muffins, pie crusts, cinnamon sugar toast, or even oatmeal. You can roll donuts in it, use it as a filling for cinnamon rolls, or enliven your morning coffee with it. 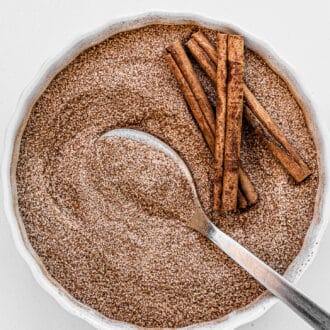 Yield: 10 tablespoons
Prep Time: 5 mins
Cook Time: 0 mins
Total Time: 5 mins
This homemade cinnamon sugar adds sweetness and spice to everything from buttered toast to ice cream. It's quick and easy to make using our perfect cinnamon sugar ratio, and it will keep in your pantry for up to 2 years!

If you love making your own spices, check out all of our seasoning blends!