This Baked General Tso's Cauliflower is every bit as delicious as the fried version. It's quick and easy to make and is a super delicious vegan + paleo meal.

The first time I told my handsome man we were having General Tso's Cauliflower for dinner, his response was, “That's it?” I watched his face turn from confused to desperate as I confirmed that dinner would be cauliflower and rice. No meat. No other veggies.

I turned down pleas to add some peppers or onions or A.N.Y.T.H.I.N.G. else to the pan. Not that some extra veggies are a bad idea, but this baby's all about the cauliflower.

What happened to his face after the first bite was nothing short of a transformation. He declared that it was the best cauliflower he'd ever eaten. He started talking about opening a restaurant that sells only General Tso's Cauliflower. He told me we (read: I) need to make this every week from now on.

The guy's got a point, this is some really good cauliflower.

I've been wanting to make General Tso's Cauliflower for a while, but I've only ever seen recipes that call for deep frying the cauliflower first. I don't have anything against deep frying veggies (have you tried Najib's Lebanese Cauliflower yet?) but I wanted something a little healthier.

By coating the cauliflower in a little corn starch before you bake it, you'll get cauliflower that is a little crispy and very much like the deep fried version.

It tastes sinfully delicious without piles of calorie heavy oil.

And then there's the sauce. We need to go here for a minute, or ten. The other thing I heard from my handsome man, between mouthfuls of General Tso's Cauliflower, is that we need to bottle this sauce and put it on everything. The guy's got a point.

It's sweet with the tiniest bit of tangy and it practically begs you to lick every last drop of it off of your plate. It also winds its way around each piece of cauliflower and sticks in all the grooves. With each bite of cauliflower, you'll taste a delicious spoonful of the sauce, too.

This meatless Monday dinner is 1000x better than any Chinese takeout, and almost just as easy. You will love it! 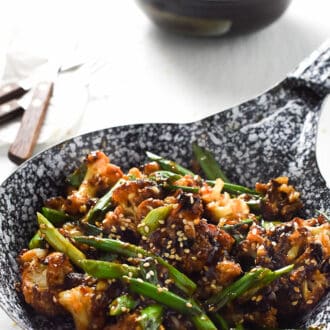 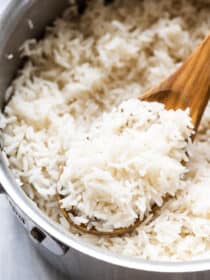