Jump to Recipe Leave a Review

This General Tso's chicken recipe is savory and sweet with the right amount of heat. Slowly cooked chunks of chicken are crispy on the outside, tender on the inside, and perfectly coated in the most delicious sticky-sweet sauce. Make this easy recipe on a weeknight for a healthier than takeout meal that everyone will love!

Turn this savory dish into a meal with a side of sauteed bok choy with ginger and garlic and our favorite coconut rice.

This recipe was originally published in 2015. We've updated the post with some new photos and more information, but we've left the delicious recipe exactly the same.

What is General Tso's Chicken

General Tso's chicken is a popular sweet and spicy deep-fried chicken dish served at Chinese-American restaurants. While there's debate about the exact origins, it's been associated with Zuo Zongtang, a military leader from Hunan province during the Qing Dynasty. The classic version of this dish has a distinctive tangy sauce with intense spices and savory flavors native to Hunanese cuisine. It's typically served with broccoli on a bed of warm rice.

This crockpot version of General Tso's chicken is sticky and sweet, with just the right amount of heat. It's everything you love about the take-out version without any of the unwanted ingredients. It makes a great weeknight dinner because with little effort, you can prep it, turn it on, and come back to a perfectly cooked dinner. Don't have a slow cooker? You can easily make it on the stovetop, too.

How to pronounce General Tso's Chicken

It has been known by different names such as General Tao’s chicken, General Tong's chicken, General Chow's chicken, or simply general's chicken. To pronounce tso, the sound is midway between “cho” and “joe”. You can reproduce the Chinese sound by combining the “ts” consonant of “cats” and “Oh” and uttering them together, “ts-oh”.

How to make General Tso's chicken

There are a few different ways you can go about making a delicious General Tso's chicken. Here we make it in the slow cooker and it turns out so good every time! The meat becomes really tender and the sauce thickens to perfectly coat each piece. It's simple to make at home by following a few simple steps:

How to make General Tso's chicken on the stovetop

While we love how this recipe turns out in the crockpot, it also turns out great on the stovetop, and it's simple, too. Here's what to do:

There's nothing unhealthy about General Tso's chicken per se. Like all cooking, it depends on the quality of the ingredients and how it's prepared. The popular takeout version is coated or breaded chicken that gets deep-fried and then smothered in sauce, which may contain msg or other ingredients.

This healthier version will have fewer calories because it skips the deep-frying, has no unwanted ingredients, and the sauce is naturally sweetened with honey. Served with rice and vegetables, it's a lightened-up version you can feel good about eating anytime!

How long do leftovers last?

Store any extras in an air-tight container for up to 3 days.

Can I use chicken thighs instead?

Yes, you can use boneless, skinless chicken thighs instead.

Where can I find hoisin sauce?

Hoisin sauce is a popular Asian cooking sauce found in the international aisle of most grocery stores.

While it's typically served with broccoli and rice, in the pictures we keep things simple by serving this General Tso's chicken with thinly chopped cucumbers. Our creamy cucumber salad also goes really well with this recipe!

It's also a great meal for serving family-style with a few other Asian sides and a big bowl of warm rice. Try it with our spicy honey roasted carrots, sautéed green beans with garlic, or whole roasted cauliflower with sesame and ginger and our favorite coconut rice. 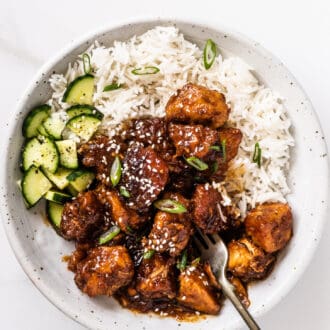 Yield: 4 servings
Prep Time: 15 mins
Cook Time: 4 hrs
Total Time: 4 hrs 15 mins
This General Tso's chicken recipe is savory and sweet with the right amount of heat. Slowly cooked chunks of chicken are crispy on the outside, tender on the inside, and perfectly coated in the most delicious sticky-sweet sauce. Make this easy recipe on a weeknight for a healthier than takeout meal that everyone will love!