We've been told over and over again that this is the BEST chicken tortilla soup ever. With a couple of easy tricks, you can maximize the flavor while keeping the prep time low. Make it in your crockpot or on your stovetop, either way it's a healthy and delicious Mexican recipe that's a true crowd pleaser.

Don't forget to enjoy a fizzy lime margarita while you're making dinner. And guacamole makes a great starter!

When your Latino bestie says that this is the best chicken tortilla soup he's ever eaten, you know that the recipe truly deserves to be called The Best.

We've always been huge fans of chicken tortilla soup around here. But it took some serious recipe testing before we nailed the recipe so that it is absolutely the best.

We have three simple and easy tricks to transform this chicken tortilla soup from good to freaking awesome. Want to know what they are?

The thing that makes most soup recipes fail is the store-bought broth. Sure, it's convenient, but it's a pretty sad replacement for deliciously rich homemade chicken stock.

To keep the convenience factor high and the workload low, we're boosting thin and watery store-bought stock with chicken bones. In other words, we're making our own chicken stock.

The difference this simple trick makes cannot be understated. By slowly simmering the bones for hours, the soup takes on an almost creamy feel and is absolutely bursting with flavor.

Keep this trick in your back pocket when making other soups, too!

2.  Blend the onions and garlic. ← What a sneaky little trick.

First, saute them until the onions are golden and caramelized. Then, put them in the blender with the dried peppers that were soaked and a little water and blend them until they become a delicious liquid gold.

This means that every single sip of you take will have all sorts of flavor. It works like magic.

3. Use Dried peppers. ← This is also worthy of being classified a trick.

Most chicken tortilla soup recipes call for chili powder. The problem with that is most chili powder is not awesomely flavorful. If you want to add The Best title to this soup, pick up some dried peppers.

You can find a variety of dried, Mexican peppers in many supermarkets. Bonus points that they're also super inexpensive and will last (nearly) a lifetime in your pantry.

Three peppers seem to be the magic number in this soup, but it's not super important which types of peppers you use.

The three peppers that we like best are guajillo, pasilla, and ancho. None of these peppers are spicy, but they are all very flavorful.

NOTE: Use the links above as a reference, but check your local store before buying them online. For us, the peppers are cheaper in-store.

WARNING: don't use three spicy chili peppers. These are all heat with very little flavor. If you'd like a spicier soup, add one chili pepper (chili de arbol) to your mix of peppers.

Take a peek at the picture below to see the peppers we like to use in chicken tortilla soup:

This soup will keep for 3-4 days in your fridge. Store the crispy tortillas in a sealed container in your pantry for up to a week.

Yes! chicken tortilla soup freezes very well. We like to use these large reusable Stasher freezer bags for freezing soup.

What to serve with chicken tortilla soup

Chicken tortilla soup is easily a complete meal in itself. But if you'd like to serve it as a part of a bigger meal, here are a few of our favorite Mexican sides:

And don't forget about enjoying a fizzy lime margarita! 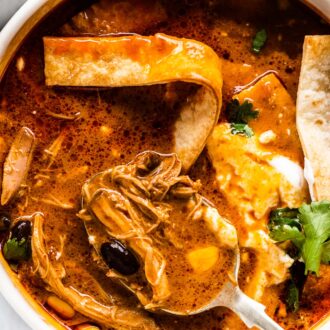 Yield: 6 servings
Prep Time: 20 mins
Cook Time: 4 hrs
Total Time: 4 hrs 20 mins
We've been told over and over again that this is the BEST chicken tortilla soup ever. With a couple of easy tricks, you can maximize the flavor while keeping the prep time low. Make it in your crockpot or on your stovetop, either way, it's a healthy and delicious Mexican recipe that's a true crowd-pleaser.

We've tried many different combinations of peppers and every time this soup turns out great. The important part seems to be that you use dried peppers, not necessarily which types of peppers you use. If you would like a spicier soup, add one spicy chili pepper, like chili de arbol, into the mix. Make sure you use bone-in chicken. The bones are what make the soup extra flavorful. Usually, bone-in chicken is sold with the skin on, simply pull the skin off before putting the chicken in the pot.
Serving: 2 ½ cups, Calories: 511kcal, Carbohydrates: 53g, Protein: 43g, Fat: 15g, Saturated Fat: 3g, Polyunsaturated Fat: 3g, Monounsaturated Fat: 7g, Trans Fat: 1g, Cholesterol: 139mg, Sodium: 2282mg, Potassium: 1280mg, Fiber: 8g, Sugar: 9g, Vitamin A: 207IU, Vitamin C: 16mg, Calcium: 106mg, Iron: 5mg
DID YOU MAKE THIS RECIPE?If you love this recipe as much as we do, be sure to leave a review or share it on Instagram and tag @TheEndlessMeal.

Pin this chicken tortilla soup recipe to save it for later!

posted by Kristen Stevens on September 26, 2020