Solyanka is a rich and hearty soup that is popular in Russia and Eastern Europe. It's made with cured meats, green Gordal olives, pickles, veggies, and a flavorful beef broth. The unusual ingredients blend together perfectly to create a soup that is irresistible.

Solyanka (which is also spelled soljanka) is a hearty soup with salty/sour flavors. While some of the ingredients might seem a little strange to see in a soup recipe, the flavor is incredible.

This recipe is a meat solyanka and is made with three (yes, three!) different types of cured meats.

What type of olives are best in solyanka?

When making solyanka, we love using Gordal olives. They are big and juicy and their gentle flavor does not overpower the soup.

We always have some on hand as they're versatile and are as good to snack on as they are to cook with. They add an amazing flavor (and are so healthy!) that we add them to a lot of recipes we make.

Did you know that in Canada, one out of every two olives eaten comes from Spain, including these Gordal olives used in this solyanka soup recipe?

What type of meat to use in solyanka?

Most recipes will call for three different types of meat. Here are a few options if you want to experiment:

How to make solyanka

Most solyanka soup recipes start with making a bone broth then sautéing ingredients and adding them to the broth a few things at a time.

But we like to make your life easier, and less messy. So we've figured out how to make solyanka soup in one pot (yay for fewer dishes) and in less time. Don't worry, it's every bit as delicious as what you're served in a Russian restaurant.

That's it! You just made solyanka!

Tips for making the best solyanka

Make sure to use bone broth. You can make it yourself using our easy beef bone broth recipe, or you can find it in the freezer section of your local grocery store.

Avoid overcooking the soup. Let the soup simmer just long enough to bring the flavors together.

Don't skip the toppings. The lemon is essential and both the sour cream and dill add so much to the soup. 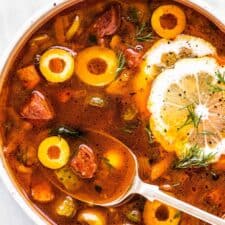 Yield: 4 servings
Prep Time: 10 mins
Cook Time: 30 mins
Total Time: 40 mins
Solyanka is a rich and hearty soup that is popular in Russia and Eastern Europe. It's made with cured meats, green Gordal olives, pickles, veggies, and a flavorful beef broth. The unusual ingredients blend together perfectly to create a soup that is irresistible.

Solyanka is typically made with three types of meat, but the specific types of meat vary widely. Any kind of sausage, smoked or cured meat, or even leftover chicken or beef will work. See the blog post for more ideas!
Serving: 1 ¾ cup, Calories: 741kcal, Carbohydrates: 13g, Protein: 50g, Fat: 54g, Saturated Fat: 18g, Polyunsaturated Fat: 7g, Monounsaturated Fat: 26g, Trans Fat: 1g, Cholesterol: 124mg, Sodium: 3851mg, Potassium: 869mg, Fiber: 3g, Sugar: 5g, Vitamin A: 3519IU, Vitamin C: 9mg, Calcium: 79mg, Iron: 3mg
DID YOU MAKE THIS RECIPE?If you love this recipe as much as we do, be sure to leave a review or share it on Instagram and tag @TheEndlessMeal.

Pin this solyanka soup recipe to save it for later!