Baked sweet potato latkes have beautiful crispy edges and are soft inside. They are irresistible served hot with a big dollop of sour cream and some green onions. This baked version is much healthier than traditional deep-fried latkes yet it's every bit as delicious.

We love serving sweet potato latkes with a fresh salad, like our Avocado Cucumber Salad or The Best Kale Salad.

Traditionalists beware, this is not your ordinary latke recipe. We first shared this sweet potato latke recipe here YEARS ago. Now, we add a little cheese on top because melty cheddar makes them even better.

There are crispy bits on the outside and sweet soft potato-y insides and with a big dollop of sour cream on top. The deliciously sweet flavor of the sweet potatoes shines through.

They're a little bit of heaven.

How to make sweet potato latkes

We like to keep things easy, which is why we bake our latkes. Once they're in the oven you can prep a salad or make any other dishes you are serving.

See those edges down there? CRISPY!

Can sweet potato latkes be made ahead of time?

Yes! You can assemble them ahead of time and keep them in your fridge (on the baking sheet) until you're ready to bake them.

Can you freeze latkes?

Yes, but they won't be quite as good as fresh. They'll still be tasty, but a little less tasty than when you first pull them out of the oven. Here's how to freeze latkes:

To reheat the latkes, place them on a parchment paper-lined baking sheet and heat them for about 20 minutes in the oven. 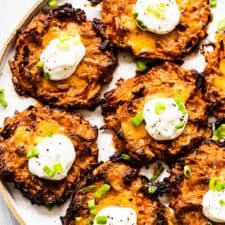 Yield: 18 latkes
Prep Time: 15 mins
Cook Time: 45 mins
Total Time: 1 hr
Baked sweet potato latkes have beautiful crispy edges and are soft inside. They are irresistible served hot with a big dollop of sour cream and some green onions. This baked version is much healthier than traditional deep-fried latkes yet every bit as delicious.

Pin this recipe to save it for later!