Baked BBQ Chicken is the best way to enjoy BBQ chicken all year round! We use only 2 ingredients and have perfected our baking method so that the chicken turns out juicy with the best sweet and sticky glaze every time!

We love serving this baked BBQ chicken with our Greek lemon potatoes (baked at the same time as the chicken) and some garlic green beans.

How to bake BBQ chicken

This recipe is so easy to make that it's one of our go-to recipes for when we don't feel like cooking. Here's what to do:

What cut of chicken is best for this recipe?

Chicken thighs! Specifically, bone-in and skin-on chicken thighs will give you tender, juicy chicken with a deliciously sticky glaze. Drumsticks work well, too.

Boneless chicken thighs cook very quickly so if you use them the BBQ sauce won't have a chance to get deeply caramelized. They'll be good, but not as good.

Avoid using chicken breasts, except as a last resort. They tend to dry out with a long bake in the oven AND they release a lot of liquid so the BBQ sauce becomes watery rather than thick and sticky.

Which BBQ sauce sauce is the best?

We love love love our BBQ sauce for chicken. It's sweet and tangy with a hint of smoky flavor. It's also quick to make and easily made refined sugar-free.

But any BBQ sauce will work well. You can use what you have in your fridge or buy your favorite bottle. Sweet Baby Ray's is a popular choice for store-bought BBQ sauce!

Why cook the chicken in the sauce

Most BBQ baked chicken recipes call for the chicken to be baked first and the sauce added at the end. But in recipe testing, we found a better method.

Baking the chicken in the BBQ sauce the entire time allows the sauce to thicken and become deliciously sticky.

And don't worry about the crispy skin. Even if you only baste the BBQ sauce on the skin at the last minute, it still won't be anymore crispy than if you use our method.

But letting the chicken cook the entire time in the sauce lets the sauce get nice and thick and amazingly delicious.

Can this recipe be made on the grill?

What to serve with oven baked BBQ chicken

Simple sides are best with BBQ chicken as this recipe will be the star of the show. Here are a few of our favorites: 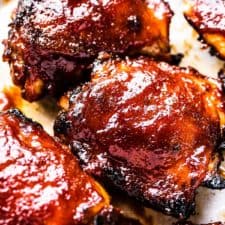 Yield: 8 chicken thighs
Prep Time: 10 mins
Cook Time: 55 mins
Total Time: 1 hr 5 mins
Baked BBQ Chicken is the best way to enjoy BBQ chicken all year round! We use only 2 ingredients and have perfected our baking method so that the chicken turns out juicy with the best sweet and sticky glaze every time!

Even if you're not a fan of chicken skin, rub some of the BBQ sauce under the skin and leave it on while you cook the chicken. Before you broil the chicken, you can remove the skin and baste the meat directly. This will help keep the chicken tender and juicy. We love using our BBQ sauce for chicken in this recipe!
Serving: 1 chicken thigh, Calories: 363kcal, Carbohydrates: 11g, Protein: 24g, Fat: 24g, Saturated Fat: 6g, Polyunsaturated Fat: 5g, Monounsaturated Fat: 10g, Trans Fat: 1g, Cholesterol: 142mg, Sodium: 387mg, Potassium: 358mg, Fiber: 1g, Sugar: 9g, Vitamin A: 173IU, Vitamin C: 1mg, Calcium: 20mg, Iron: 1mg
DID YOU MAKE THIS RECIPE?If you love this recipe as much as we do, be sure to leave a review or share it on Instagram and tag @TheEndlessMeal.

Pin this baked bbq chicken recipe to save it for later!