I remember the turning point clearly. The day that my taste buds changed and I learned to like, and then love, what I used to despise. It had happened before, first with red wine then with olives and now, finally, with beets. My mother, who was visiting from out of town, placed on the table a white ceramic plate piled high with little cubes of bright orange roasted yams, crimson beets, and crispy potatoes, leeks and rosemary. Although it was late summer, the kitchen smelled of autumn.

What I had never liked about beets was that they always tasted of freshly tilled soil, and smelled a little like it too. Served with the sweet yams and the pungent rosemary the earthiness of the beets took a big step into the background. While I can't say I fell in love with beets that night, it was the start of a love affair that continues to this day.

I need to stop and thank a good friend of mine, Ryan, for reminding me of a tradition that I've had over the last three years that I somehow almost forgot this year. Sitting at Judas Goat and eating their Marinated Beet Salad with Seasoned Ricotta & Rosemary Honey, our conversation sounded something like this: Mmm, OMG this is delicious. Mmm, I love beets. Mmm …  I think you get the point. It wasn't until he mentioned his love of canned beets that I remembered about the Ginger Pickled Baby Beets that I have been making for the last few years.

These are the beets that changed my mind about pickled beets. At the same time they manage to be warm and winter-like from the ginger and cool and crisp like summer. The earthy soil taste, which I have grown to love, shines through.  Plus, seeing the dark red jar in my fridge makes me happy.

This year I decided to try out another recipe: Maple and Ginger and Pickled Beets with Pearl Onions. The salad Ryan and I shared at Judas Goat was quite sweet and I must have salivated over it still when I read this recipe. I would love to tell you how the sweetness of the maple syrup compliments the spiciness of the ginger, but I cannot. At they moment both jars are sitting pretty on my counter waiting for two weeks for the flavours to fully ripen. I can tell you though that if they taste as good as they look then I might be without pickled beets even before the end of beet season.

Adapted from a recipe on epicurious.com 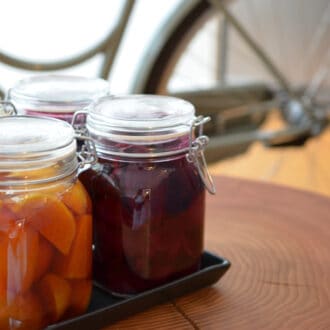 Yield: 2 – 750 ml Mason Jars
Prep Time: 30 mins
Cook Time: 10 mins
Total Time: 40 mins
These pickled baby beets have the loveliest zing from the ginger. They're perfect for salads, as a side dish or even on their own. You will LOVE them!

Adapted from a recipe I have on a torn out page from a magazine. Unfortunately, there is no indication on the bit of page that indicated which magazine this recipe came from. If you know, please tell me. I'd like to give credit where credit is deserved!
Serving: 1 serving = ¼ cup, Calories: 22kcal, Carbohydrates: 4g, Protein: 1g, Fat: 1g, Saturated Fat: 1g, Polyunsaturated Fat: 1g, Monounsaturated Fat: 1g, Sodium: 29mg, Potassium: 140mg, Fiber: 1g, Sugar: 2g, Vitamin A: 15IU, Vitamin C: 2mg, Calcium: 13mg, Iron: 1mg
DID YOU MAKE THIS RECIPE?If you love this recipe as much as we do, be sure to leave a review or share it on Instagram and tag @TheEndlessMeal.
Dinner Recipes Lunch Recipes Salads

posted by Kristen Stevens on September 26, 2011