This One Pot Vegan Pasta is the ultimate easy and delicious dinner recipe. The pasta is cooked in a spicy sun-dried tomato and roasted red pepper sauce then covered in tomatoes and buttered breadcrumbs and broiled to perfection.

Diving into this whole one pot pasta thing head first. As in, swan diving straight into that skillet, mouth open wide. Bring it on!

What you're looking ☝️☝️ at is a skillet full of pasta that's smothered in a spicy sun-dried tomato and roasted red pepper sauce that's been cooked in ONE POT. Not one pot to cook the pasta and another for the sauce, just one pot. Singular.

The secret is cooking the pasta right in the sauce. After quickly caramelizing the tomato paste and garlic, you pour in some vegan milk, canned tomatoes, a few spices, and the pasta. The creamy magic happens when the starches are released from the pasta and mix with the dairy-free milk to create a luscious, silky sauce.

Once the pasta is cooked you can either serve it straight away or top it with some sliced tomatoes and buttered breadcrumbs then give it a quick broil.

This is easy dinner at its best.

☝️☝️☝️ Do you see that up there? That's dinner before it magically transforms into the easiest vegan pasta dish you've ever made. I wasn't joking about the one pan thing.

Here's the other magical thing about this dinner: you can keep it vegan, or not. Totally your choice. My plate looked like the one below, but my handsome man's plate was covered in melty, aged white cheddar cheese.

If you eat a plant-based diet and are a fan of vegan cheese, it certainly wouldn't hurt to stir in a little with the basil and spinach at the end.

If you make this One Pot Vegan Pasta with Spicy Sun-Dried Tomato Sauce make sure you snap a pic and tag #theendlessmeal and #go_veggemo on Instagram so I can like and comment on your photos. I love seeing TEM recipes you create! 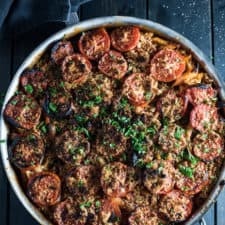 If you're in a hurry, you can skip adding the tomatoes and buttered breadcrumbs and eat the pasta as soon as it's ready from the stovetop.
Serving: 1 serving = ⅙ of the recipe, Calories: 394kcal, Carbohydrates: 76g, Protein: 15g, Fat: 4g, Saturated Fat: 1g, Polyunsaturated Fat: 2g, Monounsaturated Fat: 1g, Trans Fat: 1g, Sodium: 954mg, Potassium: 953mg, Fiber: 7g, Sugar: 10g, Vitamin A: 2459IU, Vitamin C: 36mg, Calcium: 204mg, Iron: 4mg
DID YOU MAKE THIS RECIPE?If you love this recipe as much as we do, be sure to leave a review or share it on Instagram and tag @TheEndlessMeal.
Dinner Recipes Mediterranean North American Pasta Recipes Quick and Easy Recipes Recipes Tomato Recipes