This Chocolate Blackberry Crumble is so good you'll NEVER know it's a healthy dessert recipe. The grain-free topping resembles your favorite traditional crumble topping but it's made without oats. It's crazy delicious.

Chocolate Blackberry Crumble! Sweet summer blackberries + dark chocolate + the best crumble that just so happens to be both grain-free and refined sugar-free.

Seriously though, no one you share this Chocolate Blackberry Crumble with will ever ever ever know it's healthy.

When I said to my handsome man, “Can you believe this is paleo and vegan?” he belly laughed and rolled his eyes. When I didn't join him in laughing at the ‘joke' his eyes got all confused and he said to me, “You're not serious, are you?”

Healthy desserts that taste like regular desserts are THE BEST!!

See those beauties up there? Those are wild blueberries that I picked after a run the other day. I have scratches all over my arms and legs to prove it. They are seriously the sweetest blackberries I have ever eaten. They should win an award for coaxing me out in this heat for four runs in a week. I'll shed a tear if even a single juicy berry goes to waste.

I know that crumble topping is supposed to have oats in it. But this one doesn't and I'm not making any apologies.

Here's the thing, I really like oats in my blackberry crumble topping. So to get a similar texture to oats took a bit of experimenting. Here's what I found out:

You could eat this blackberry crumble with delicious melted chocolate straight out of the oven and all on its own. But if you have some ice cream on hand, you'd be crazy not to scoop some on top.

You could opt for your fav store-bought dairy-free ice cream or get fancy and make your own. This vanilla coconut ice cream or coconut cherry ice cream would both be amazing with this recipe!

That bite right there is calling your name. Go ahead, you deserve it! 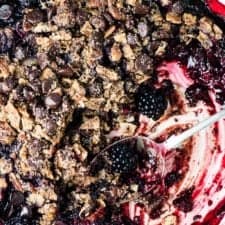 While you could substitute desiccated coconut, the texture of the crumble won't mimic oats as much as it does with flaked coconut. Brown sugar can be substituted for the coconut sugar.
Serving: 1 serving = ¼ of the recipe, Calories: 484kcal, Carbohydrates: 38g, Protein: 7g, Fat: 37g, Saturated Fat: 20g, Polyunsaturated Fat: 3g, Monounsaturated Fat: 6g, Cholesterol: 1mg, Sodium: 188mg, Potassium: 364mg, Fiber: 11g, Sugar: 20g, Vitamin A: 251IU, Vitamin C: 24mg, Calcium: 108mg, Iron: 2mg
DID YOU MAKE THIS RECIPE?If you love this recipe as much as we do, be sure to leave a review or share it on Instagram and tag @TheEndlessMeal.
Dessert Recipes Desserts Gluten Free Desserts North American Other Sweet Things Recipes Seasonal-Summer Vegan Desserts