Did you know you can make a healthy Veggie Pizza Crust without any flour and it still tastes AMAZING! Make this low-carb green pizza crust with either kale, spinach, broccoli, or zucchini and sneak some extra veggies into your meal. It's a surprisingly delicious dinner recipe! 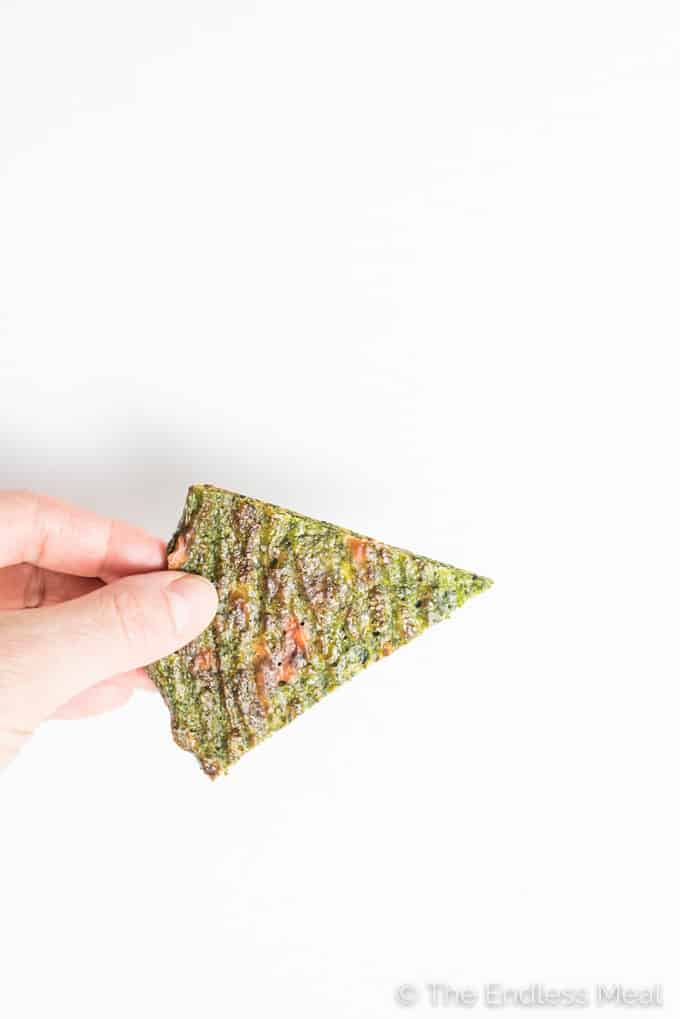 We're not having a regular ol' pizza party tonight. That's right, my friends, we're going all badass pizza rouge. There are strange and wonderful things happening here, and we're not making any apologies.

Now I know you've all heard of cauliflower pizza crust … am I right? Well, that gave me an idea to create these veggie pizza crusts. What I really wanted to do was make one recipe that was flexible enough that you could swap the veggies for whichever ones you have in your fridge/ love the most.

What we have here are five different veggie pizza crusts, and they're all amazing:

Want to know the real kicker here? My handsome man, who I was kind of scared wouldn't even touch these (or talk to me for days after trying to feed him these to him. ha!), couldn't stop raving about them/ asking me to make them again.

So don't be scared … veggie pizza crusts are totally where it's at! 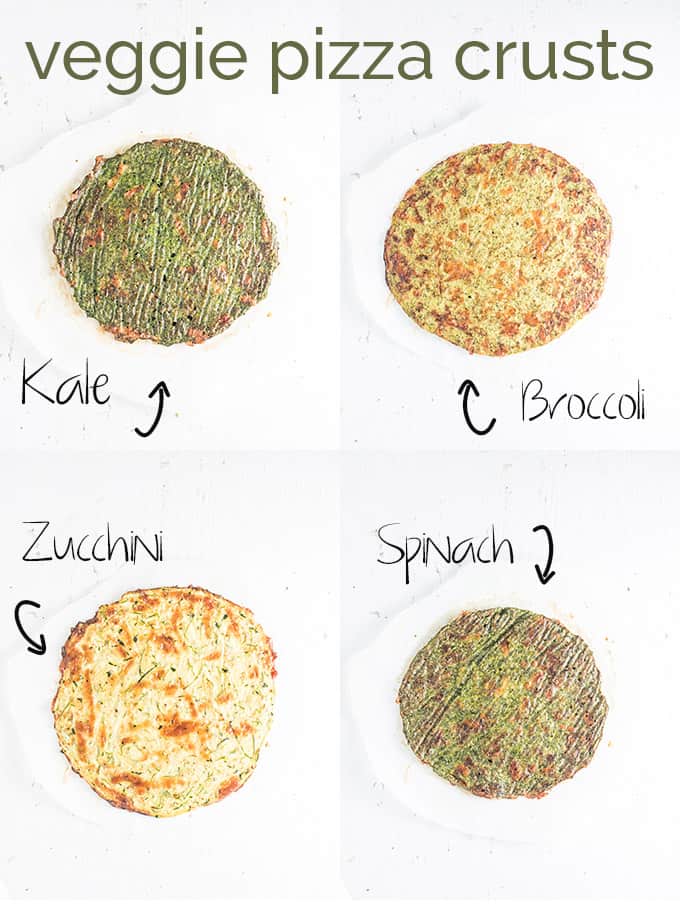 If you haven't eaten a veggie pizza crust, I imagine you're thinking, “What the heck does a pizza crust made with vegetables even taste like?” I also imagine your face is a little scrunched up in that way mine does when someone tries to sell me on something ‘healthy' that doesn't sound tasty at all.

Here's the thing … you'll never mistake one of these crusts for a regular pizza crust, and that's totally ok. They are softer than their traditional counterpart, but still hold themselves together well and even have a bit of a bite.

Here's where the amazing part comes in: crispy cheese. Yes, you read that right. You know when you bake a big pile of nachos and some of the cheese melts off the chips and glues itself to the pan and you spend half the night prying off each and every morsel cause it's just so. damn. tasty. Ya, that. That's what these veggie pizza crusts are like.

You see, when you bake them all the cheese melts and some of it gets crispy and it's AWESOME! It's flavorful crispy cheese amazingness in every bite. 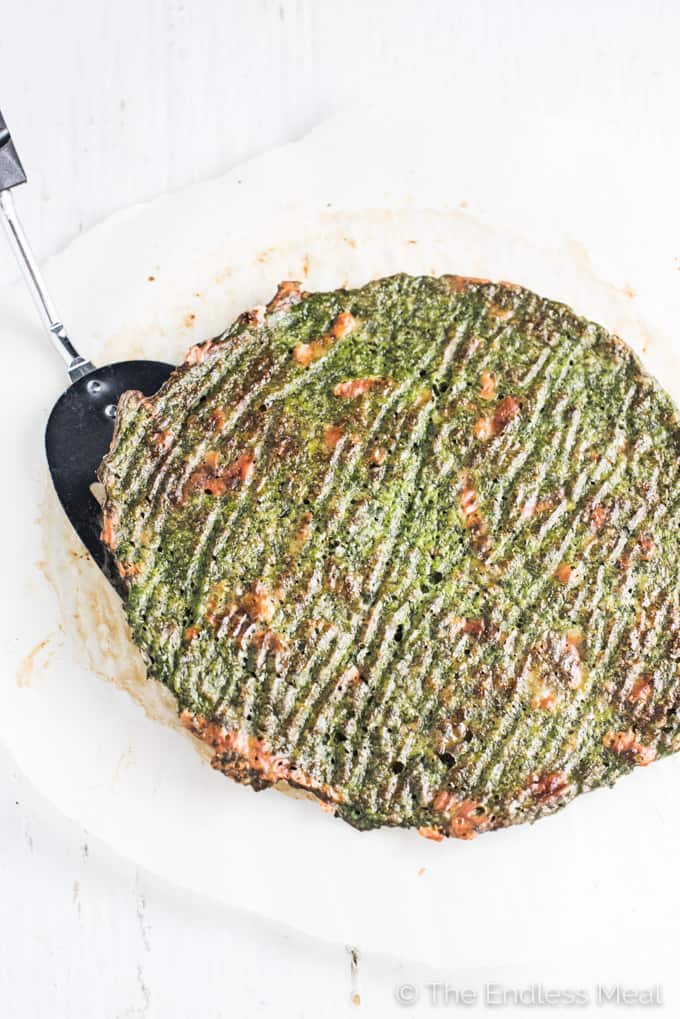 What you need to know about veggie pizza crusts:

♡    We've already covered the crispy cheese deliciousness part (the most important part) so I'll leave that.

♡    The kale and spinach pizza crusts are almost exactly the same. They're so similar that I couldn't tell them apart in a side by side taste test. ← Yes, my ‘job' involves taste testing pizza. I have the best job in the world.

♡    The broccoli pizza crust tastes a little like broccoli  – surprise surprise! It's not a bad thing at all, just something to keep in mind when you're planning your toppings.

♡    Vegetables naturally have a lot of water in them. The more moisture you can take out of the veggies before you make them into crusts, the crispier they will be. The broccoli pizza crust is a little soft if made exactly as the recipe is written. If you'd like it crisper, you can cook the broccoli before making it into crusts to remove more of the moisture.

♡    Go easy on the toppings. While you will be able to pick these up and eat them like a regular pizza, you don't want to push your luck by piling the toppings on high. Take the minimalist approach! 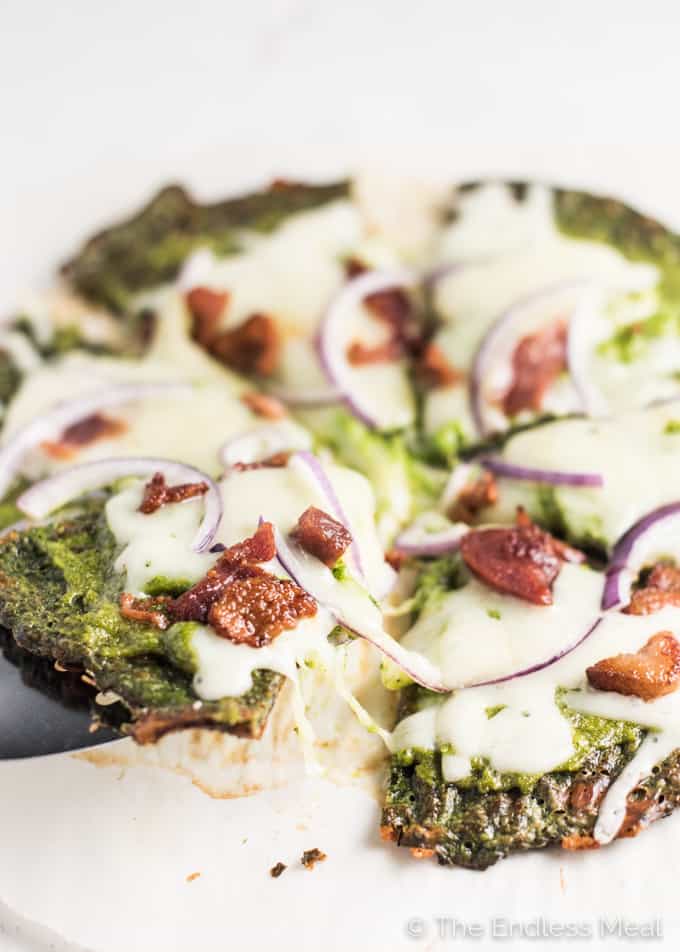 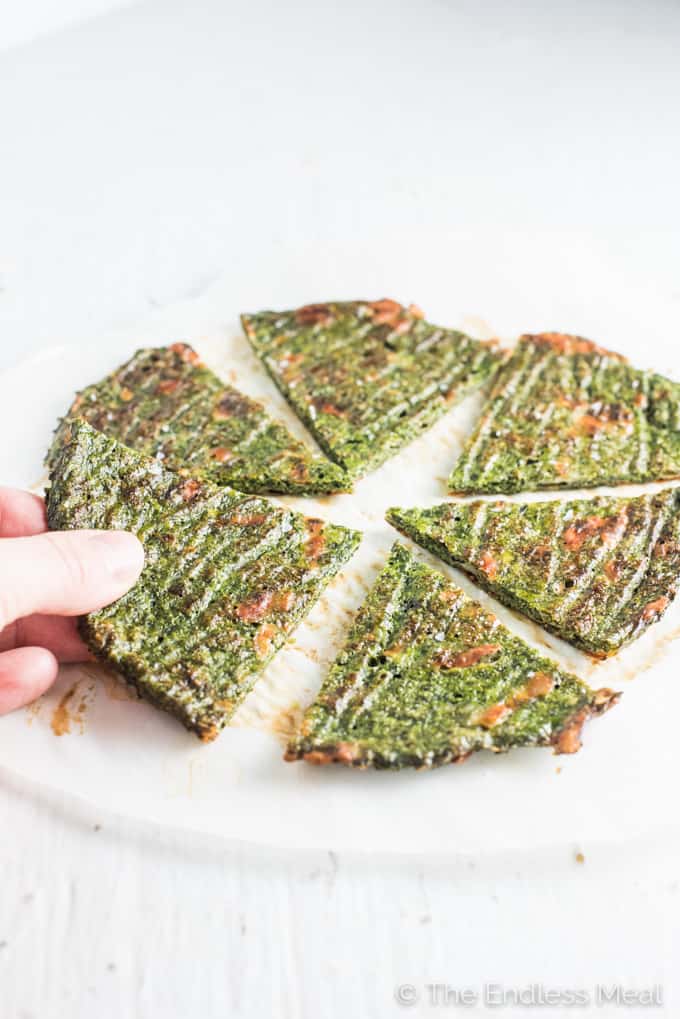 Did you know you can make a Veggie Pizza Crust without any flour and it still tastes AMAZING! Make this low-carb green pizza crust with either kale, spinach, broccoli, or zucchini and sneak some extra veggies into your meal. It's a surprisingly delicious dinner recipe!

To prepare the veggies:

Kale and Spinach: place in your food processor and blend until finely chopped. Squeeze out as much liquid as you can using your hands.
Broccoli: add the florets and stems to your food processor and pulse until finely chopped. Optional step: roast in the oven for 10 minutes to dry the broccoli so you get a crisper pizza crust.
Zucchini: grate using the small holes on your grater. Squeeze out as much liquid as possible, first using your hands and then with some paper towels.