Spicy Chipotle Mushroom Sloppy Joes for the win! This is the ultimate comfort food makeover. I've turned traditional Joes into a healthy and Meatless Monday dinner recipe. Your whole family will LOVE these! Vegetarian + vegan + gluten-free.

In honor of what I thought was International Beer Day, I present you with Chipotle Mushroom Sloppy Joes! Note: it's not beer day today, that was 2 weeks and a half ago. Who's really counting anyway?

Remember when I shared that recipe for Healthier Peanut Butter Cookie Dough Ice Cream and declared I am basically a 5-year-old living in a grown-up's body? If you didn't believe me then, these messes on buns should seal the deal. I mean, what kind of adult eats sloppy joe's? Clearly winning at this adulting thing. #NeverGrowningUp

If being a kid means I get to chow down on Chipotle Mushroom Sloppy Joes, I'll take it any day. You guys, these things are so good!

You guys prob know by now that I'm not a vegan. BUT … that doesn't mean I don't like digging into a meatless meal. I mean, I was vegetarian for 14 years. That must count for something.

I've said it before, I think meat-eaters are the best judges of vegan food. If I serve a meat-free meal to someone who normally eats meat, and they like it, I know it's a winner. Replacing the richness and depth of flavor that meat gives a meal is not an easy task. Most of the time, it's near impossible.

With this recipe, I've used a few tricks to create a deeply flavored sauce ← Is sauce the right word here? I think mess would be better here, but I'll leave it.

Mushrooms and walnuts. These two are the base of these Chipotle Mushroom Sloppy Joes and both are flavor-packed alternatives to traditional protein. As a big bonus, walnuts are a great source of protein.

Caramelized onions. Deeply caramelizing the onions gives them a ton of sweet flavor that totally makes the joes.

Caramelized tomato paste. Same deal as the onions. Giving the tomato paste a few minutes to caramelize in the pan enhances its flavor.

Beer. It's not just for drinking. Using the combination of caramelized tomato paste and beer (rather than tomato sauce) is a huge flavor booster.

Worcestershire sauce. That weird sauce with the confusing to pronounce name has all sorts of umami. Use vegan or regular, your choice.

Two things not to miss on these joes …

The Slaw. The super easy to make slaw adds the perfect amount of crunch factor that makes the joes. I've kept the slaw super simple as getting fancy with a dressing isn't necessary here. Veggies + a drizzle of oil = slaw. Simple and exactly what the joes want.

The Chipotle Aioli. I love this part. It adds another layer of richness and a tiny bit of creaminess that totally works. 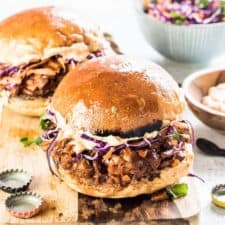 When I buy jars of chipotle peppers in adobo sauce, I blend them in a small blender then keep the puree in a clean jar in my fridge. They are easier to use this way and last for a very long time.
Serving: 1 sloppy joe, Calories: 581kcal, Carbohydrates: 53g, Protein: 16g, Fat: 36g, Saturated Fat: 4g, Polyunsaturated Fat: 22g, Monounsaturated Fat: 8g, Trans Fat: 1g, Cholesterol: 6mg, Sodium: 1421mg, Potassium: 1250mg, Fiber: 9g, Sugar: 17g, Vitamin A: 4428IU, Vitamin C: 45mg, Calcium: 180mg, Iron: 5mg
DID YOU MAKE THIS RECIPE?If you love this recipe as much as we do, be sure to leave a review or share it on Instagram and tag @TheEndlessMeal.
Dinner Dinner Recipes North American Recipes Seasonal-Autumn Seasonal-Winter