When corn makes its short seasonal appearance, you'll find us in our backyard making this chili lime grilled corn on the cob on repeat. It's smoky and sweet, with a little heat, and dripping with the flavors of chili-infused butter, fresh lime, and cilantro. It's easy, delicious, and takes only 20 minutes to make!

Chili lime grilled corn on the cob is so finger-lickin' good! Pair it with some grilled fish tacos and a watermelon margarita for a quintessential summer meal.

Corn season doesn't last long where we live, so when it makes its appearance mid-summer, we find as many ways to eat it as we can. Our favorite way to cook it, on the grill, gives it the most wonderful smoky char and irresistible sweet crunch.

We wait until it's done on the grill to brush it with chili-infused butter, a squeeze of fresh lime juice, and minced cilantro before serving it hot.

This summertime staple side dish is surprisingly easy to make, and pairs perfectly with other grilled or Mexican mains. While you're at it, make extra for mixing into salads and dips or stirring into soups. This really is the best grilled

How to grill corn on the cob

When grilling corn on the cob, we do it straight on the grill. We've tried it both ways (with and without the corn husks), and the overwhelming consensus is to let those kernels meet the grill! It gives the corn delicious flavor and texture, and it's faster too.

Here's how to make chili lime corn on the cob on the grill in a few easy steps:

You're likely to have most of the ingredients for this recipe already in your pantry. Here's what you'll need to make this chili lime grilled corn on the cob recipe:

How to make a ‘husk handle'

To make them as we've done in the pictures, simply remove the first few really tough outer layers then peel back, but don't remove, the rest of the husk. Tear a piece of husk to use as a string to tie the husk together. It's a bit of effort, and not necessary, but it makes a great handle!

How long should I grill corn on the cob?

With the husks off, bbq corn on the cob for about 10 minutes. Temperatures will vary between grills so you may need to adjust the cooking time by a few minutes (plus or minus). The corn is cooked when it's evenly grilled on all sides and has a few nice dark golden charred spots.

Here are a few ideas to mix up the flavors of the chili lime butter, and make it your own:

Should I soak the corn first?

When grilling the corn without its husk, you don't need to soak it. Simply give it a light coating of oil before placing it on the grill to lock in the moisture and prevent it from sticking.

Is it better to grill it with the husks on or off?

We prefer to remove the husks and use them as a handle. We like the texture and taste of the corn better when the kernels meet the grill. If you chose to make it with the husks on, you can still follow the recipe by adding the butter, lime, and cilantro after the corn is cooked and the husks are removed.

What temperature should I heat the grill?

We recommend heating your BBQ to high (450-500 Fahrenheit) so the grill gets nice and hot.

How long do leftovers keep?

In the highly unlikely event that you have leftovers, store them in an airtight container for up to 4 days.

While most grocery stores start stocking corn on the cob in mid-summer, the place to get the freshest, sweetest, and best-tasting corn is directly from the farmer or the farmers' market. They always sell the best corn.

Can I make this corn recipe in my oven?

Yes, you sure can. But you will miss the smoky flavor from the grill. If you don't have a BBQ, broil the corn for about 8 minutes, turning it a few times.

What to serve with grilled corn on the cob

Tender grilled corn on the cob is a summer staple and perfect for BBQ parties. Serve it with other grilled foods like meat, burgers, tacos, hotdogs, and pasta salads.

For a Mexican-inspired menu, serve it with our chunky grilled guacamole, summer veggie grilled steak tacos, or Mexican pasta salad, and a fizzy lime margarita, of course.

Slice it from the cob and add it to salads, soups, and anything else that might benefit from a bit of sweet smoky corn taste!

Popular corn on the cob recipes 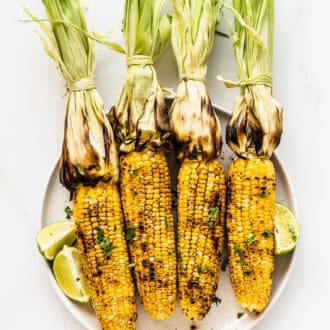 Yield: 4 servings
Prep Time: 10 mins
Cook Time: 10 mins
Total Time: 20 mins
When corn makes its short seasonal appearance, you'll find us in our backyard making this chili lime grilled corn on the cob on repeat. It's smoky and sweet, with a little heat, and dripping with the flavors of chili-infused butter, fresh lime, and cilantro. It's easy, delicious, and takes only 20 minutes to make!

If you'd like to leave the husks on, like in the photos, carefully pull the husks back from the corn cobs, remove the silks, then tie back the husks using one piece of the husk as a rope. When you're cooking the corn, keep most of the husk out of the BBQ.
Serving: 1 ear of corn, Calories: 126kcal, Carbohydrates: 21g, Protein: 3g, Fat: 5g, Saturated Fat: 2g, Polyunsaturated Fat: 1g, Monounsaturated Fat: 2g, Trans Fat: 1g, Cholesterol: 8mg, Sodium: 107mg, Potassium: 222mg, Fiber: 3g, Sugar: 4g, Vitamin A: 478IU, Vitamin C: 10mg, Calcium: 11mg, Iron: 1mg
DID YOU MAKE THIS RECIPE?If you love this recipe as much as we do, be sure to leave a review or share it on Instagram and tag @TheEndlessMeal.
BBQ Recipes Corn Recipes Cuisines Dinner Recipes Lime Recipes North American Recipes Side Dishes Summer Recipes

posted by Kristen Stevens on September 23, 2014

2 comments on “Chili Lime Grilled Corn on the Cob”