Apple cider mimosas are so simple, refreshing, and festive! With fresh apple cider, bourbon, sparkling wine, and a cinnamon sugar rim, they're the perfect fall cocktail for seasonal celebrations. They're easy to make and they're ready in just 5 minutes!

We're putting an autumnal twist on the classic brunch cocktail with these apple cider mimosas. We swap the orange juice for apple cider and use bourbon instead of grand marnier, which gives it lots of fall flavor and makes it taste like apple pie.

They're easy as pie to make, too. We start by dipping a champagne glass in cinnamon sugar to give it a tasty rim. Then we pour in the apple cider and bourbon (or rum) and then top it with sparkling wine to make it all bubbly. We garnish the glass with a fresh apple slice, and that's it!

It's the cinnamon sugar rim that really does it for us, though. It's sweet with lots of cinnamon flavor and it looks elegant, too.

Apple mimosas are a crowd-pleasing drink that look fancy without being fussy, and are perfect for cozy brunches or sipping by the fire.

Here's what you'll need to make this crisp and refreshing mimosa recipe with apple cider:

How to make an apple pie mimosa

Apple cider mimosas are festive and refreshing, making them perfect for special occasions or autumn nights. Here's how to make it in a couple of easy steps:

How to make a pitcher of apple cider mimosa

If you're entertaining, it's easy to turn this recipe into a pitcher for parties by using cups instead of ounces. Use 2 cups of apple cider, ½ cup of bourbon (or spiced rum), and 2 cups of sparkling wine. To serve, simply rim your champagne flutes with cinnamon sugar, and pour.

What kind of sparkling wine works best with this recipe?

We like making mimosas with brut as the drier taste is a nice balance with the sweet juice. If you prefer to sip something sweeter, go ahead and use prosecco or cava. For this recipe, a mid-priced bottle works best. Pick something that you'd enjoy sipping on its own but isn't overly expensive.

Can I prepare them ahead of time?

You can rim the glass the day before your party. And you can mix the apple cider and bourbon (or rum) in a pitcher a day in advance and leave it in your fridge. Make sure to wait until you're ready to serve it to add the sparkling wine so it's cold and bubbly.

The perfect ratio of juice to sparkling wine is really up to you. In the recipe, we use a 50/50 ratio of apple cider to sparkling wine, so that's a good place to start. Then you can experiment by adding more or less juice depending on your taste.

Can I make it a virgin cocktail?

Yes! To turn it into a mocktail (aka no alcohol), simply omit the bourbon (or spiced rum) and use sparkling water instead of sparkling wine. Or you can choose to opt for a dealcoholized sparkling wine.

What to serve with an apple cider mimosa

Like the classic mimosa, this apple cider cocktail pairs perfectly with pancakes, eggs, and bacon for brunch. It's also a great pre-dinner drink for holidays like Thanksgiving or Christmas with appetizers like these three easy party dips. 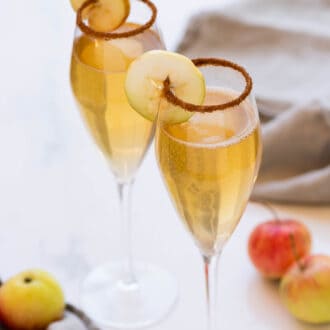 posted by Kristen Stevens on November 8, 2022