If you haven't had Lomo Saltado before, you're in for a real treat. As strange as it sounds, it's a Peruvian steak and French fry stir fry and it's absolutely delicious. It's a simple to make and healthy dinner recipe that can easily be adapted to make it gluten-free + paleo + Whole30 compliant. 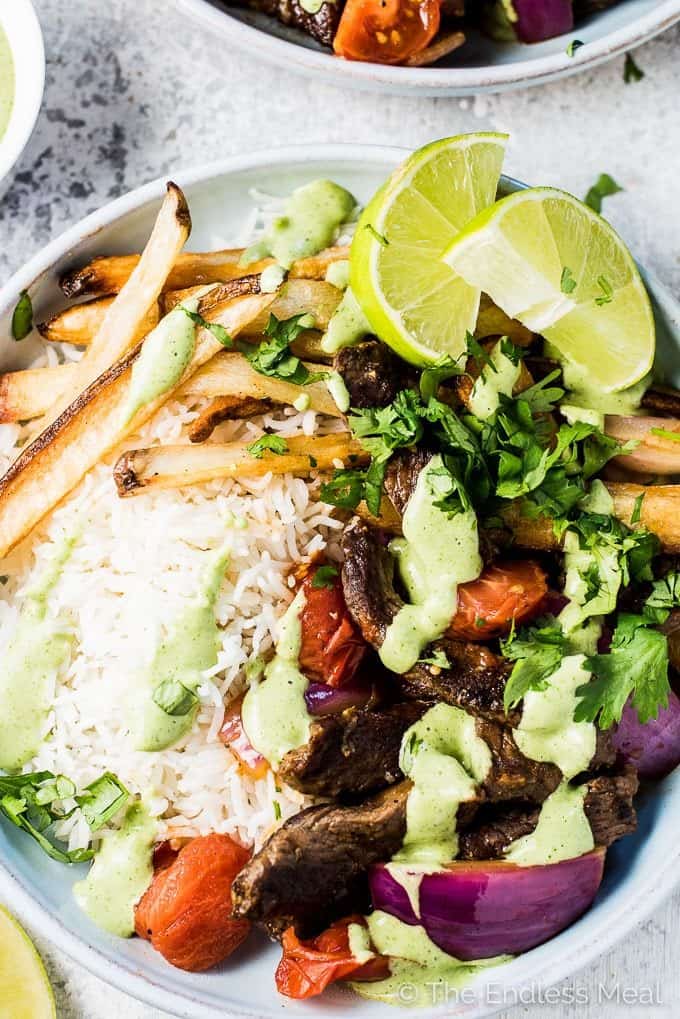 You guys, I couldn't be any more excited. I've dreamed about hiking around Machu Pichu, drinking pisco sours on the beach, and eating my way through Lima for years. It's finally going to happen!

A few months ago, my sister asked me if we wanted to join her and her son (my super awesome nephew Taj) on their next trip. Taj, who's only 8 years old is already quite the traveler. My sister's strapped on her backpack and took him on a big trip every second year since he was born. His first trip, when he was 10-months-old, her and I both went with him to El Salvador. He's an old pro.

Little Ava absolutely ADORES him. The love goes both ways as he tells everyone she's his little sister. My sister and I have both got some confused looks because of it. Ha! ?

And as if it wasn't awesome enough that we get to do this family trip together, I found out that two of my best friends, Michael and Jorge, will be down there for the first part of our trip. So ya, today is all kinds of exciting for me! 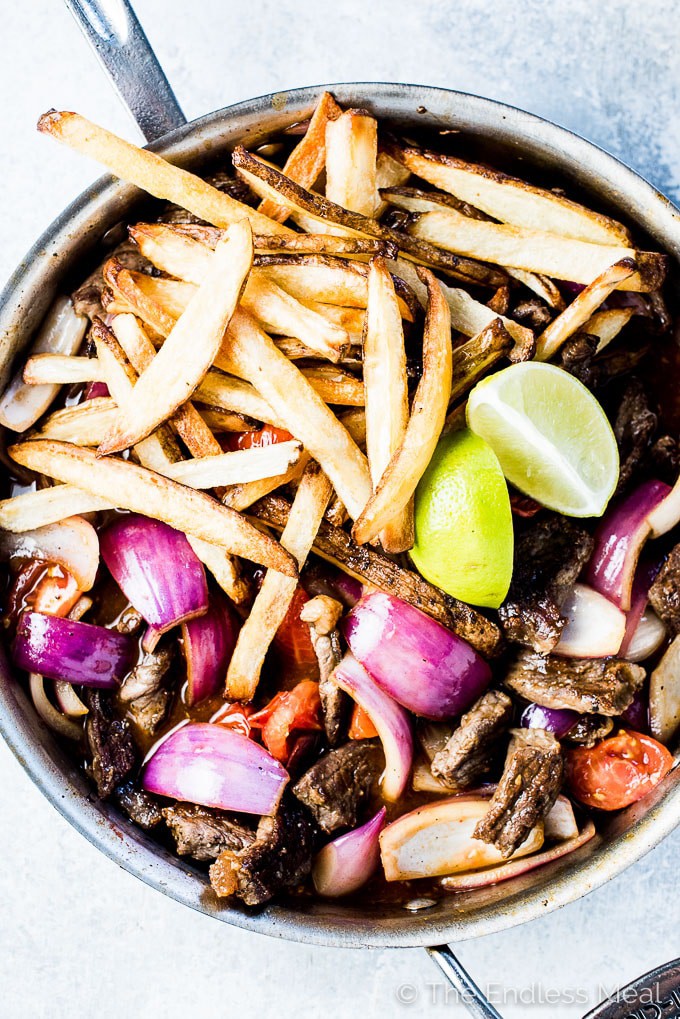 The first time I heard of lomo saltado was from Jorge. He described it as a steak and French fry stir fry that is served with rice – which is exactly what it is. I know that fries and stir fry sound like the weirdest combo ever. He had to make it for me before I believed him that it's actually brilliant.

Can you trust me on this one? You definitely want to make it. Here's what's going on:

1.  We've got steak that has been thinly sliced, well seasoned with salt and pepper, then seared over high heat until browned.

2.  Next, we quickly stir fry some onions and tomatoes until both begin to soften.

3.  Then we pour a soy and vinegar-based sauce into the pan and let it thicken slightly.

4.  Mix in some crispy fries and spoon that goodness over rice.

5.  Drizzle (or drown) that in a slightly spicy and creamy green sauce and dig in! 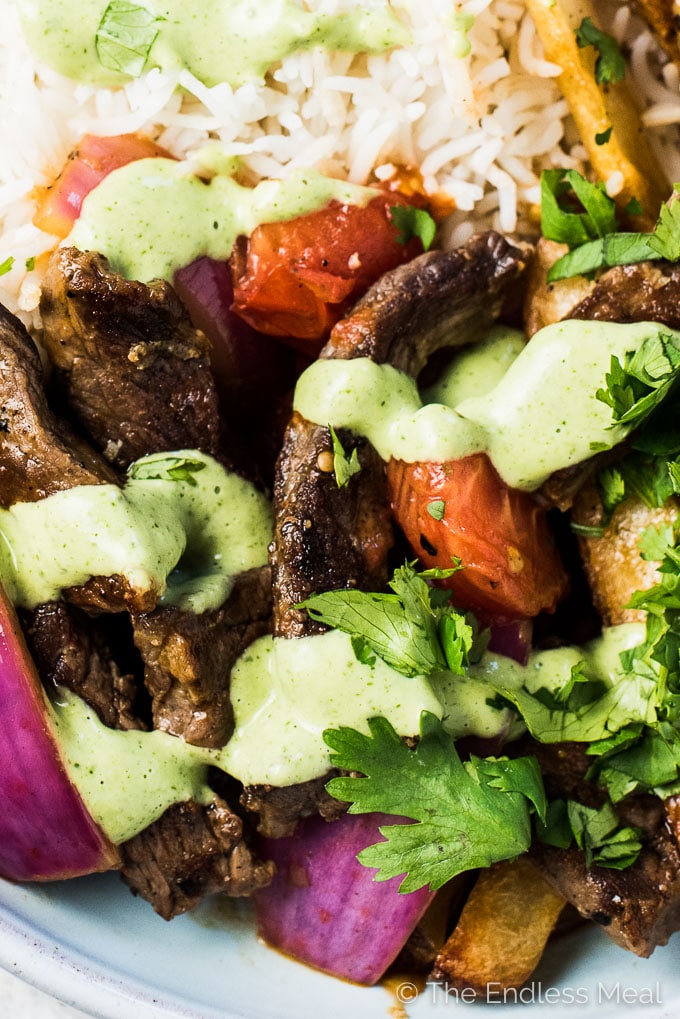 I've made a couple of minor adjustments that I know Jorge would deem totally not Peruvian. But hey, that's what I do. I switch things up! But honestly, the changes are really minor and I still feel totally ok calling this lomo saltado. I mean really, there're steak and fries that are stir-fried together. Totally lomo saltado.

Are you ready to hear what the changes are? Here we go:

1.  I added lime juice to the stir fry sauce AND served it with limes on top. Whoa, craziness!

2.  I added a little corn starch to the sauce. I found it's a little watery without and the corn starch helps thicken it just enough so that it sticks to the steak and veggies. This isn't an Asian-style thick cornstarch-y sauce. Like I said, it's just a little. Or just right in my books.

Typically, I'm told you would serve this with aji amarillo, but those peppers aren't available anywhere in Vancouver. So I did another sacrilegious thing and made up my own. I'm talking about a creamy, slightly tangy, a little spicy, cilantro-based green sauce that is. just. so. freaking. good. 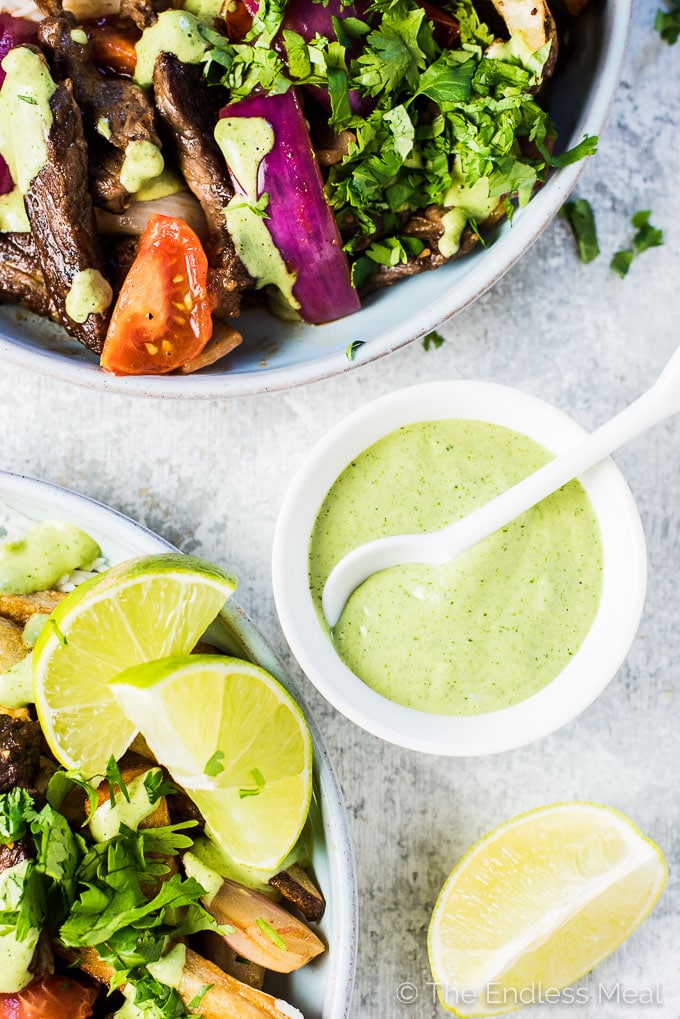 How to get your lomo saltado on paleo + Whole30 style:

You have to know, if you ask a Peruvian, they'll almost die if you suggest eating this with anything other than white rice. To quote a text message from Jorge, “We would never EVER eat it with brown rice.” I can't even imagine if I had suggested cauliflower rice. Ha!

But … if white rice isn't your jam, use what is. I eat cauliflower rice as a replacement all the time. If you like it with other recipes, you'll like it with this one, too.

Other than the big rice replacement, there are a few other minor ones that you may or may not want to switch up. Mainly, the soy sauce can be replaced with coco aminos. So easy!

If you're comfortable with eating potatoes and yogurt (some paleo peeps are and some are not) then you are good to go. If you're not, simply use a different root vegetable to make your fries. Again, so easy!

If you're on the Whole30, make sure to use an approved mayo and leave the yogurt out of the sauce. You may want to add a splash of vinegar to give it that little tang.

See how easy that was to make lomo saltado both paleo and Whole30 compliant? 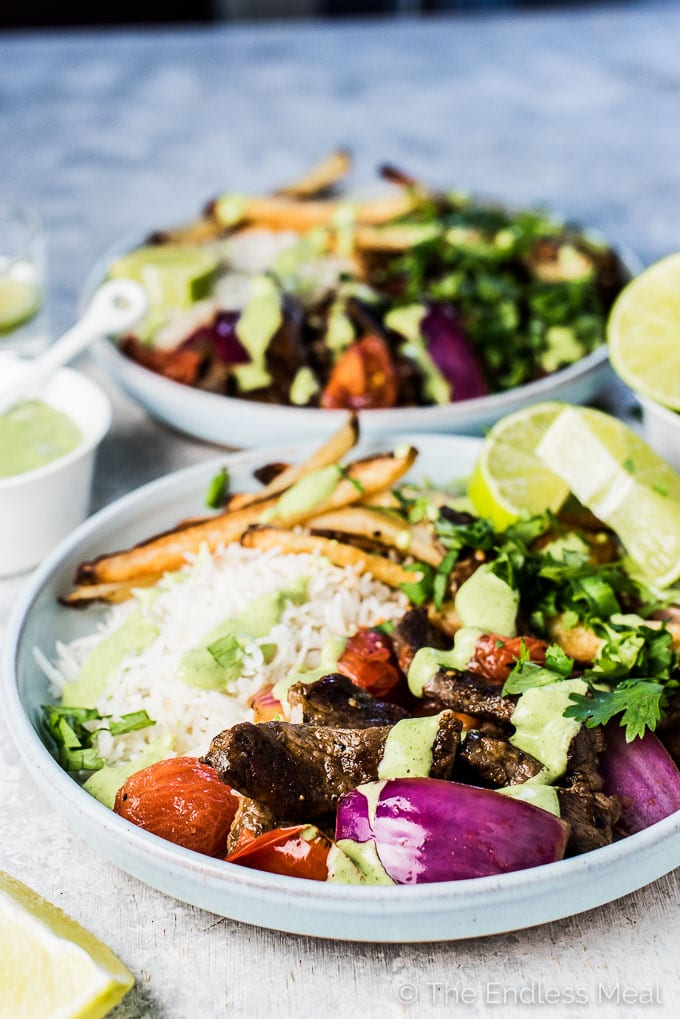 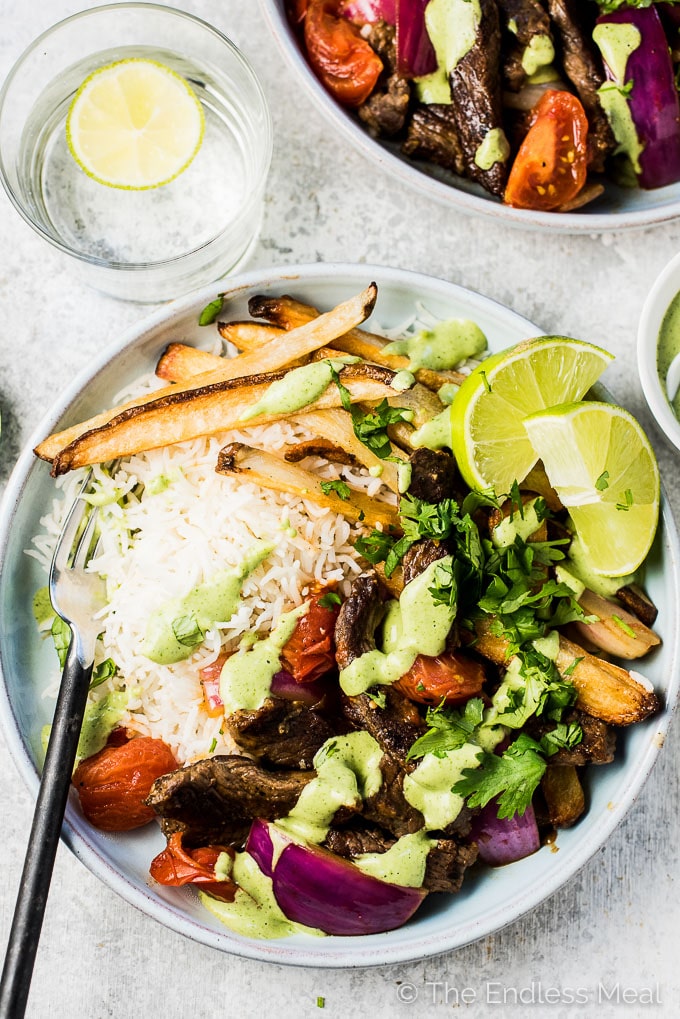 If you haven't had Lomo Saltado before, you're in for a real treat. As strange as it sounds, it's a Peruvian Steak and French Fry Stir Fry and it's absolutely delicious. It's a simple to make and healthy dinner recipe that can easily be adapted to make it gluten-free + paleo + Whole30 compliant.

I cook my basmati by adding 1 1/2 cups of rice + 2 1/4 cups of water to a medium-sized pot. Bring it to a boil over high heat then cover the pot and reduce the heat to medium. Cook the rice for 15 minutes then remove it from the heat and set it aside for about 10 minutes.

posted by Kristen Stevens on September 12, 2017