These Valentine's Day Cupcakes are a delicious combo of dark chocolate and spicy cinnamon heart candies. If you like cinnamon hearts, you will LOVE these!

These Valentine's Day Cupcakes are moist, dark chocolate cupcakes infused with spicy cinnamon hearts flavor. Seriously, can you think of anything more delicious? Ya, me neither.

Do you know how some things just scream Valentine's Day? Like those Valentine cut-out cards that are exchanged by seven-year-olds in grade two. Do they still do that? Or heart-shaped candies that say ‘Be mine' and ‘I heart you.' Seems they now also say 'email me' which makes me laugh more than I think it should. Or fiery red cinnamon hearts that seem to have resisted any change since I was a child.

Mmm … cinnamon hearts. If Valentine's Day were a flavor, this is what it would taste like.

I'll never know why it took me so long to marry cinnamon hearts with dark chocolate. They really do deserve to be together. Forever.

The dark chocolate holds its own without overpowering the cinnamon. And while the cinnamon hearts are certainly the most outspoken of the two, they manage to not take over the dark chocolate. If they were a real-life couple, they'd make the perfect team.

These little guys had me proclaiming my love for them after the first bite. Whatever your plans are for Valentine's Day, please, please, please, include these dark chocolate and cinnamon hearts cupcakes in them. 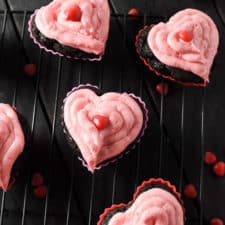 posted by Kristen Stevens on February 4, 2016