Four of my favorite words: Bacon. Bourbon. Caramel. Popcorn. Each on their own sounds amazing and delicious but together … oh man, it's almost too much.

You might remember the bacon caramel popcorn that I made for my cutest ever little nephew for his 3rd birthday. (Which was almost 2 years ago to the date. 2 years ago! Crazy.) It was one of the best things I had eaten at that point.

And why is this the first time since experimenting with that recipe 2 years ago that I've made it since? Also crazy.

I made this popcorn for a catering event I had a few weeks ago. See those cute little bags? ↑ I was feeling so Pinterest-y making them, which is usually so not me. Don't you love it when you feel for a nano second that you could maybe be a part of all those incredibly talented and crafty Pinterest goddesses out there?

Or maybe you are one. In which case I bow down to you.

I've made this recipe a few times since and served it as a part of the dessert at the supper club. I love how fun and unconventional popcorn for dessert feels. It's playful and light and oh so unexpected.

I'll admit that the bourbon doesn't play a huge roll in this recipe. It's definitely an in-the-background flavour. The bacon on the other hand … oh the bacon. The rich, smoky, delicious bacon. There's lots of it in here which made my mouth very happy.

If you make this Bacon Bourbon Caramel Popcorn, make sure to snap a pic and tag @theendlessmeal on Instagram so I can like and comment on your photos. I love seeing TEM recipes you create. 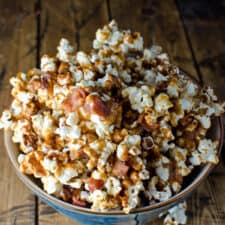 Yield: 28 cups
Prep Time: 30 mins
Cook Time: 30 mins
Total Time: 1 hr
You can't go wrong when your popcorn has bacon, bourbon and caramel. This popcorn treat is a different kind of dessert but is absolutely amazing!

Do not use a pot that is too small as the caramel will bubble up considerably.
Serving: 1 cup, Calories: 184kcal, Carbohydrates: 20g, Protein: 2g, Fat: 10g, Saturated Fat: 5g, Polyunsaturated Fat: 1g, Monounsaturated Fat: 3g, Trans Fat: 1g, Cholesterol: 21mg, Sodium: 209mg, Potassium: 63mg, Fiber: 1g, Sugar: 15g, Vitamin A: 164IU, Vitamin C: 1mg, Calcium: 15mg, Iron: 1mg
DID YOU MAKE THIS RECIPE?If you love this recipe as much as we do, be sure to leave a review or share it on Instagram and tag @TheEndlessMeal.
Dessert Recipes Desserts Gluten Free Desserts North American Other Sweet Things Recipes