If you're looking for a healthy and DELICIOUS summer salad recipe, this Grilled Smashed Potato Salad is it. The potatoes are boiled, gently smashed, then grilled for tons of extra flavor. They're tossed with some greens and an easy to make lemony yogurt and chive dressing. It's delish vegetarian + gluten-free side dish everyone will love!

Pull out your sundresses, take off your shoes, and fire up that grill. Summer has arrived! Or close enough that I'm callin' it. You with me?

You guys, I've got to admit that this recipe really surprised me. It started out as an “I don't want to turn my oven on” recipe but turned into a recipe that can really hold its own. Grilling the smashed potatoes adds a TON of flavor. I was expecting the crispy edges and creamy insides, just like regular smashed potatoes. The smoky, grilled goodness as a bit of a surprise.

Don't worry, it's not overwhelming. It simply adds an extra layer of deliciousness. So not going back! 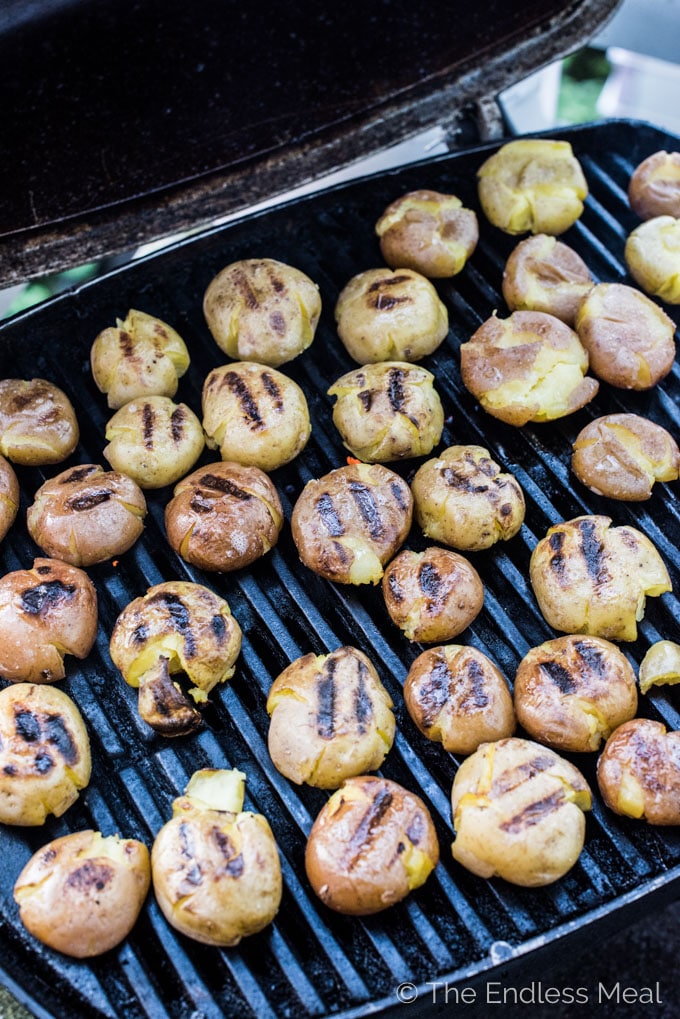 Can we take a second to smile at that tiniest BBQ ever? It's my Weber Baby Q, and the only thing small enough to fit on my teeny tiny balcony. It's a great little grill, but I dream of the day I get to have a full-sized, grown-up BBQ. #citygirldreams

What I should be sharing (so you could have a good laugh) is a video of me trying to BBQ on that thing. We have it wedged into the corner on an angle since our balcony is so small we can't set it down straight. It's also on the ground so I have to kneel down beside it each and every time I put food on, flip it over, flip it over again, and take it off. It's awesome. ← Insert eye roll.

What is awesome is this Grilled Smashed Potato Salad. I mean, just look at those beautiful grill marks. ? 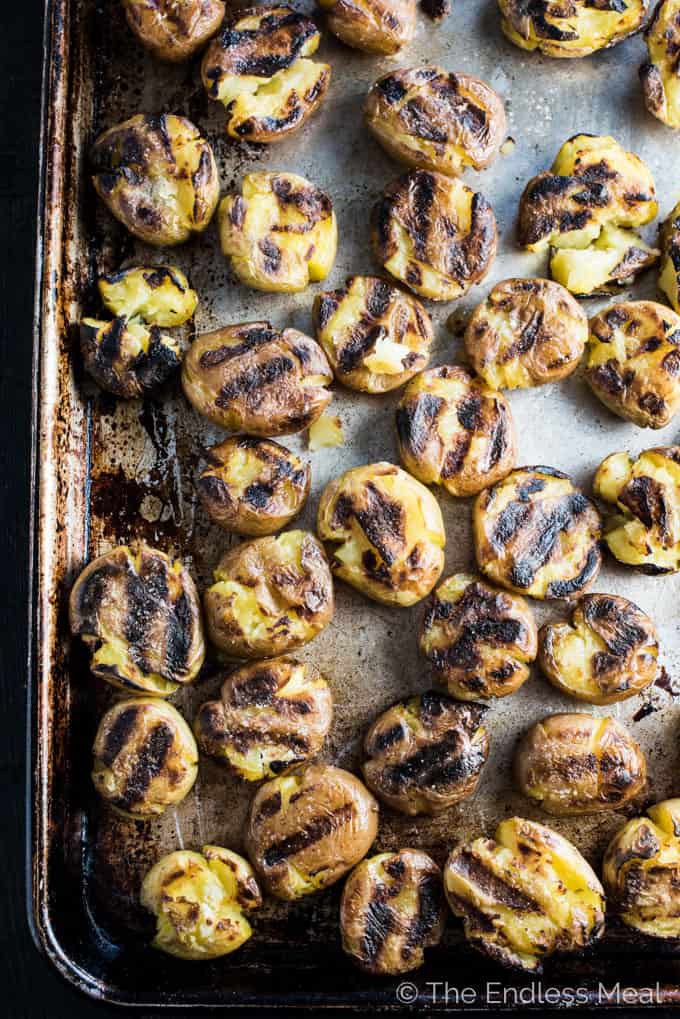 Those babies are every bit as crispy on the outside and creamy inside as their oven-baked cousins. But these guys win (hands down) in the flavor department. The BBQ adds a smoky grilled flavor that no oven can match.

I have a feeling I'll be braving the cold this winter just to fire up the grill for Smashed Potato Salad.

Then there's the lemon yogurt dressing that I want to eat on everything, including by the spoonful. It's as simple as it gets, but the flavors are perfect together.

I use high-fat yogurt because that's the way I roll. The brand I normally buy (Olympic) has a Balkan-style, 11% milk fat yogurt that is beautiful. It's the highest fat yogurt that's available in the stores I shop in so it's always the one I reach for.

If you're trying to save a few calories, you can opt for a lower fat option. Just make sure that it is thick and doesn't have any sugar or flavorings in it.

You're going to take that yogurt, squeeze in some lemon juice, stir in some chives, and give it a pinch of salt and pepper. That's it! It's simple and the perfect dressing for the smashed potatoes.

♡   Squash (or smash) them between your palms. If you're going for a smash, make it a gentle smash. You don't want to obliterate them.

♡    Salt salt salt. Potatoes LOVE salt. Be generous, then be generous some more. It's almost impossible to over salt potatoes, so don't be afraid to use a heavy hand. (sidebar – if you've been told salt isn't good for you, open a new tab and Google “New York Times Salt.” There's a great article that may help change your mind.)

♡    Butter up those salted potatoes and throw (or maybe just place) them on the grill.

♡    Use the grilling time to whip up the yogurt dressing and then pour it over the potatoes when they come off the grill.

After you whip up your Smashed Potato Salad, serve it with this Lemongrass Grilled Chicken, some Grilled Mustard Chicken with Walnut Sauce, or this easy to make Honey Teriyaki Salmon recipe. 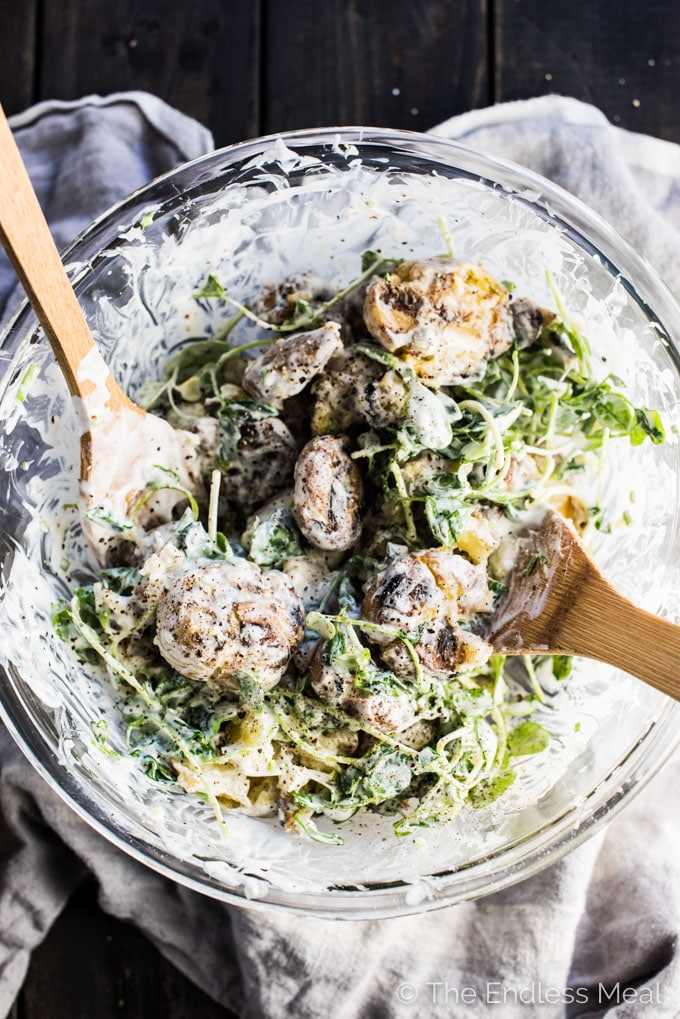 If you're looking for a healthy and DELICIOUS summer salad, this Grilled Smashed Potato Salad is it. The potatoes are boiled, gently smashed, then grilled for tons of extra flavor. They're tossed with some greens and an easy to make lemony yogurt and chive dressing. It's delish vegetarian + gluten-free side dish everyone will love!

I use a high-fat yogurt as that is what I always have on hand. I've calculated the calories using a low-fat yogurt because if I was counting calories that's what I would use!
Choose whichever suits your diet the best.