These Coconut Oil Fried Brussels Sprouts are the best fried Brussels sprouts I’ve ever eaten. They’re fried in healthy coconut oil with garlic and chilies and served with fresh lime. They are so delicious that you'll want to pop them like candy!

Is that weird? I feel like like I've passed some sort of marker into adulthood. I know that only adults are supposed to like Brussels sprouts, but I have an (untested) theory that you could feed these to anyone of any age, and they'll gobble them up.

They're just that good.

There's another dish that I've been working on lately that tastes like it should be bad for you, but is actually good for you. Don't you love that?

Fried Brussels sprouts taste like the best kind of greasy pub food, think jalapeño poppers, french fries, and deep fried pickles. The difference is that these are fried in super healthy for you coconut oil.

If you're worried that the coconut oil flavor will be overwhelming, don't be. (I wondered about that at first too, btw.) You can taste a slight coconut flavor but, with the sweet garlic, lime juice and a touch of spice from the chilies, it works perfectly.

Nothing but serious deliciousness here.

Some Tips for Frying with Coconut Oil

Some Tips for Frying Brussels Sprouts

When should you serve fried brussels sprouts?

All the time! Joking. Sort of.

Fried brussels sprouts make a great snack, a Super Bowl/game day appetizer, or even as a side dish.

Ps. They're also paleo, vegan and gluten-free too. 🙂 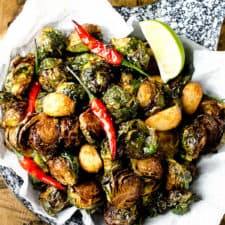 Yield: 4 servings
Prep Time: 10 mins
Cook Time: 20 mins
Total Time: 30 mins
These Coconut Oil Fried Brussels Sprouts are the best fried Brussels sprouts I’ve ever eaten. They’re fried in healthy coconut oil with garlic and chilies and served with fresh lime. They are so delicious that you'll want to pop them like candy!

posted by Kristen Stevens on February 9, 2015