Toasted Coconut Ice Cream is about to become your new favorite dairy-free ice cream recipe. Sweet and creamy coconut milk is loaded with chewy toasted coconut and a hint of vanilla. It's delicious!

This Toasted Coconut Ice Cream was originally published in 2012.

Move over Vanilla Coconut Ice Cream, there's a new kid in town! (But don't move over too much. We still love you.)

How to make the best toasted coconut ice cream

In order for your coconut ice cream to turn out creamy, you need to use high-fat coconut milk.

There is a time and a place for light coconut milk, but this isn't one of them. The higher the fat content, the creamier your coconut milk will be.

Also, try to choose a can of coconut milk without any additives. Guar gum is often added to coconut milk to make it creamier but it gives it a slightly funny texture. Try to avoid it if you can.

How to toast coconut

Coconut can go from almost golden to burned very quickly. So no matter which toasting method you choose, make sure to keep a close eye on it.

When making this toasted coconut ice cream recipe, I often toast extra coconut and save what I don't use to sprinkle on salads. It's delicious! 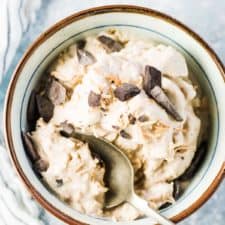