Spider cupcakes are the perfect sweet treat for Halloween. The chocolate pumpkin cupcakes are deliciously moist and topped with vanilla buttercream frosting with a spider web design.

If you're looking for spooky Halloween cupcake ideas, these spider cupcakes are what you need!

They're made with our incredibly moist chocolate pumpkin cupcakes. The cupcakes have a mild pumpkin flavor and are delicious all on their own.

But topped with orange buttercream icing, they really start to look like Halloween.

To finish them off, we draw a spider web design on the top (it's easy!) and put a little spider on top.

They are the perfect way to celebrate Halloween!

How to make Halloween spider cupcakes

We start by making our favorite chocolate pumpkin cupcakes. To make them, you'll whisk the dry ingredients (flour, etc.), whisk the wet ingredients (pumpkin, oil, etc.), and then combine them. Easy!

What to use as Halloween cupcake toppers

We like to top our spider cupcakes with plastic spider rings. These are the ones that you can find in any dollar store. You'll need to remove them before you eat the cupcakes, but they're inexpensive and spooky looking.

The other alternative is to buy edible spiders. These are made from sugar and can be found in specialty baking stores or online.

Tips for making the spider web design on cupcakes

How long will these spider cupcakes last?

These Halloween cupcakes will keep fresh for 3-4 days in a covered container on your counter.

How to store spider cupcakes?

These cupcakes are best stored at room temperature. A high-sided container with a lid is best so that the icing doesn't get smudged.

Can you freeze spider cupcakes?

If you're looking for more Halloween inspiration, check out these Halloween food ideas! 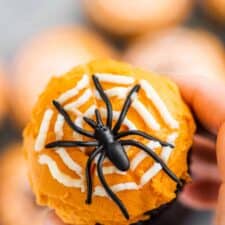 Food dye varies widely in quality and strength. You may need more to achieve the color you want.  If you would like your frosting thinner, add a little extra milk. If you would like it thicker, add a little extra icing sugar.  We trust that if you use plastic spider rings to decorate the cupcakes, you'll let people know to remove them before they eat the cupcake.
Serving: 1 cupcake, Calories: 314kcal, Carbohydrates: 38g, Protein: 3g, Fat: 18g, Saturated Fat: 13g, Polyunsaturated Fat: 1g, Monounsaturated Fat: 3g, Trans Fat: 1g, Cholesterol: 48mg, Sodium: 277mg, Potassium: 126mg, Fiber: 2g, Sugar: 25g, Vitamin A: 3458IU, Vitamin C: 1mg, Calcium: 23mg, Iron: 1mg
DID YOU MAKE THIS RECIPE?If you love this recipe as much as we do, be sure to leave a review or share it on Instagram and tag @TheEndlessMeal.

Pin this Halloween cupcake recipe to save it for later!