Get ready to get cozy with a warm mug of this spiked apple cider. Made with a mix of spices like cinnamon, cloves, and ginger, then spiked with your choice of bourbon or rum. It's a fall favorite that's easy to make on the stovetop, and it's ready in just 15 minutes!

If you're after an autumn drink without the alcohol, try our instant pot apple cider or apple lemonade.

When the temperatures drop and the seasons change, you won't catch us without a mug of something warm in our hands. This spiked cider is the perfect fall cocktail for chilly laid-back nights that will warm you up from the inside.

There are a lot of spiked apple cider recipes out there but this one is our easy and delicious go-to. We just simmer unfiltered apple juice on the stove with mix of cinnamon sticks, cloves, ginger, star anise, and peppercorns. Then pour some bourbon into cinnamon sugar rimmed glasses, and top with the spiced cider.

If you're having company, it's easy to make a double or triple batch. It will fill your home with the most incredible aromas, too!

Unfiltered apple juice is such a treat when it's in season in the fall. Depending on where you live, it can sometimes be hard to find, especially out of season. When we find it, we make the most of it!

Here's what you'll need to make this spiked apple cider:

How to make spiked apple cider

Hot mulled cider is a quick and easy cold weather cocktail for any occasion. Here's how we make it in a couple of simple steps:

Can I use regular apple juice?

Apple juice is filtered and pasteurized which doesn't give the same rich apple taste and caramel color as unfiltered apple juice. You can certainly use it, but it won't look as golden or taste as rich.

Can I prepare it ahead of time?

Yep, you can prepare the spiced apple cider up to 3 days ahead of time. Simply store it in the fridge then warm it up when you're ready to serve.

Can I make it without alcohol?

Definitely! It's easy to turn it into a mocktail by omitting the bourbon or spiced rum.

Can I make it in a slow cooker?

Yes! Simply add the cider and spices to your slow cooker, cover, and cook on low for 2-3 hours or until heated through then follow steps 2-4 in the recipe card.

Can I add orange or lemon?

We skip the citrus for this recipe, but if you love the taste go ahead and add a few slices while you're simmering the spices.

How to serve a spiked apple cider

We make this simple soul-warming spiked apple cider often throughout the season and don't necessarily need a special occasion to enjoy it. That said, it is perfectly festive for serving at Thanksgiving, Christmas, holiday parties, and even Halloween! 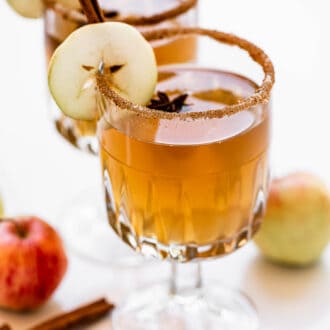 Yield: 2 drinks
Prep Time: 5 mins
Cook Time: 10 mins
Total Time: 15 mins
Get ready to get cozy with a warm mug of this spiked apple cider. Made with a mix of spices like cinnamon, cloves, and ginger, then spiked with your choice of bourbon or rum. It's a fall favorite that's easy to make on the stovetop, and it's ready in just 15 minutes!