This really is The Best Stuffing Recipe Ever. It's full of sweet cranberries and apricots, crunchy walnuts, mushrooms, onion, and celery. The veggies keep this stuffing perfectly moist without ever becoming soggy. It's our family's go-to Christmas and Thanksgiving stuffing recipe!

This is the Thanksgiving stuffing recipe we have been making for years. I know that claiming that it is the best stuffing recipe ever is quite a gigantic claim, but it's 100% true. Seriously, it's the best.

When I first shared this recipe with you back in 2012, it was my handsome man who made it for me. Since then, it's become our go-to stuffing recipe. I have a feeling that once you try it, you'll make it for all your turkey dinners.

Why this is the best stuffing recipe:

See that bowl filled to the brim with all the ingredients for this bread stuffing? Please don't copy that picture. Be smart and choose a MUCH larger bowl.

You'll want room to mix everything together without spilling half the ingredients. Trust me on this one!

In many ways, this is very similar to an old fashioned bread stuffing recipe. There are lots of onions and celery, poultry seasoning and pepper. And (obviously) bread. Kind of hard to make bread stuffing without that one important ingredient!

What takes this from traditional to the best stuffing recipe are the nuts and fruit. Two simple additions that rock the stuffing.

Once you try them in this stuffing recipe you'll seriously wonder how you ever ate stuffing any other way.

If you're making stuffing to go with your Christmas dinner this year, I beg you to make this one. It really is the best stuffing recipe ever.

Also, does anyone not make stuffing to go with their Christmas or Thanksgiving turkey? That thought has me a little worried. 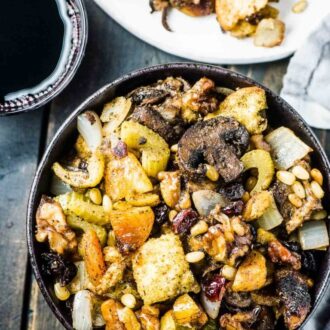 To make this stuffing ahead of time:

Bake the stuffing for 30 minutes then remove it from the oven. Leave the stuffing on your counter and once the turkey comes out of the oven, put the stuffing back in for 15 minutes.
Serving: 1 serving = ⅛ of the recipe, Calories: 363kcal, Carbohydrates: 36g, Protein: 8g, Fat: 23g, Saturated Fat: 3g, Polyunsaturated Fat: 11g, Monounsaturated Fat: 8g, Trans Fat: 1g, Sodium: 157mg, Potassium: 464mg, Fiber: 5g, Sugar: 17g, Vitamin A: 650IU, Vitamin C: 2mg, Calcium: 77mg, Iron: 3mg
DID YOU MAKE THIS RECIPE?If you love this recipe as much as we do, be sure to leave a review or share it on Instagram and tag @TheEndlessMeal.
Dinner Dinner Recipes Holiday Sides North American Recipes Seasonal-Autumn Seasonal-Winter Side Dish Recipes Side Dishes Thanksgiving, Christmas & Easter Dinner

36 comments on “The Best Stuffing Recipe Ever”