This apple bourbon smash is crisp, refreshing, and naturally sweet. With freshly muddled apple and lemon, bourbon, maple syrup, and a cinnamon sugar rim. It's the perfect bourbon cocktail for cooler autumn days. It's easy to mix up, and it's ready in under 10 minutes!

If you're all about making the most of apple season, also try our crispy baked apple chips, apple pancakes, or apple cinnamon muffins.

Here's a bourbon apple cocktail recipe that will put you in the mood for fall.

This apple bourbon smash recipe is sweetened with maple syrup which is more interesting and flavorful than sugar or simple syrup. It has lots of freshly muddled apple and lemon juice, and the cinnamon sugar rim adds warm spices for cooling temperatures.

It's the perfect festive and easy-to-make cocktail for cozy gatherings or holiday parties.

What is a bourbon smash?

A smash is a cold fruity cocktail that highlights the best ingredients of the season. It has a few basic elements: a spirit (vodka, bourbon, and whiskey all work well), ice, sometimes a splash of water, mint (or another herb), sugar, and your seasonal fruit of choice.

The ingredients are muddled up and shaken with ice until cold, then strained and served in a rocks glass. It's a versatile, easy-to-make, and seasonally flexible drink that everyone loves!

Here's everything you'll need to make an apple bourbon smash:

For the cinnamon sugar, you'll need:

You'll also need a cocktail shaker and a muddler.

How to make an apple bourbon smash

Whip up this easy-to-make drink in a few simple steps:

Can I make it ahead of time?

You can muddle the apple and lemon ahead of time and store it in the fridge for 2-3 hours. Because it's shaken with ice, the rest should be made in the moment.

Can I use simple syrup instead of maple syrup?

In a pinch! Simple syrup will add sweetness but the drink will be missing the rich maple flavor. You could also use 1-2 tablespoons of cane sugar.

Can I use apple cider instead of muddling fresh apples?

Using apple cider will change the taste and feel of the drink. It won't be a smash, but it will still be delicious.

Can I use rye whiskey instead of bourbon?

Yes! Rye whiskey tends to be a bit bolder and spicier but if that's your thing (or it's what you have on hand), go for it! 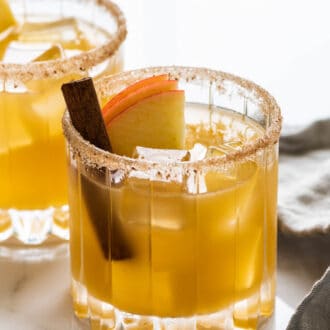 Yield: 1 drink
Prep Time: 10 mins
Cook Time: 0 mins
Total Time: 10 mins
This apple bourbon smash is crisp, refreshing, and naturally sweet. With freshly muddled apple and lemon, bourbon, maple syrup, and a cinnamon sugar rim, it's the perfect bourbon cocktail for cooler autumn days. It's easy to mix up, and it's ready in under 10 minutes!

Serving: 1 cocktail, Calories: 231kcal, Carbohydrates: 25g, Fat: 0.02g, Sodium: 3mg, Potassium: 65mg, Sugar: 23g, Calcium: 31mg, Iron: 0.1mg
DID YOU MAKE THIS RECIPE?If you love this recipe as much as we do, be sure to leave a review or share it on Instagram and tag @TheEndlessMeal.
Apple Recipes Autumn Recipes Bourbon Recipes Cocktail Drinks North American Recipes